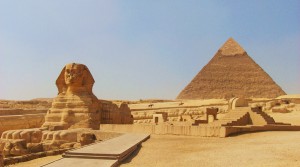 According to several reports in the Arabic media, prominent Muslim clerics have begun to call for the demolition of Egypt’s Great Pyramids–or, in the words of Saudi Sheikh Ali bin Said al-Rabi’i, those “symbols of paganism,” which Egypt’s Salafi party has long planned to cover with wax. Most recently, Bahrain’s “Sheikh of Sunni Sheikhs” and President of National Unity, Abd al-Latif al-Mahmoud, called on Egypt’s new president, Muhammad Morsi, to “destroy the Pyramids and accomplish what the Sahabi Amr bin al-As could not.”

This is a reference to the Muslim Prophet Muhammad’s companion, Amr bin al-As and his Arabian tribesmen, who invaded and conquered Egypt circa 641. Under al-As and subsequent Muslim rule, many Egyptian antiquities were destroyed as relics of infidelity. While most Western academics argue otherwise, according to early Muslim writers, the great Library of Alexandria itself–deemed a repository of pagan knowledge contradicting the Koran–was destroyed under bin al-As’s reign and in compliance with Caliph Omar’s command.

However, while book-burning was an easy activity in the 7th century, destroying the mountain-like pyramids and their guardian Sphinx was not–even if Egypt’s Medieval Mamluk rulers “de-nosed” the latter during target practice (though popular legend still attributes it to a Westerner, Napoleon).

Now, however, as Bahrain’s “Sheikh of Sheikhs” observes, and thanks to modern technology, the pyramids can be destroyed. The only question left is whether the Muslim Brotherhood president of Egypt is “pious” enough–if he is willing to complete the Islamization process that started under the hands of Egypt’s first Islamic conqueror.

Nor is such a course of action implausible. History is laden with examples of Muslims destroying their own pre-Islamic heritage–starting with Islam’s prophet Muhammad himself, who destroyed Arabia’s Ka’ba temple, transforming it into a mosque.

Asking “What is it about Islam that so often turns its adherents against their own patrimony?” Daniel Pipes provides several examples, from Medieval Muslims in India destroying their forefathers’ temples, to contemporary Muslims destroying their non-Islamic heritage in Egypt, Iraq, Israel, Malaysia, and Tunisia.

Currently, in what the International Criminal Court is describing as a possible “war crime,” Islamic fanatics are destroying the ancient heritage of the city of Timbuktu in Mali–all to Islam’s triumphant war cry, “Allahu Akbar!”

Much of this hate for their own pre-Islamic heritage is tied to the fact that, traditionally, Muslims do not identify with this or that nation, culture, heritage, or language, but only with the Islamic nation–the Umma.

Accordingly, while many Egyptians–Muslims and non-Muslims alike–see themselves as Egyptians, Islamists have no national identity, identifying only with Islam’s “culture,” based on the “sunna” of the prophet and Islam’s language, Arabic. This sentiment was clearly reflected when the former Leader of the Muslim Brotherhood, Muhammad Akef, declared “the hell with Egypt,” indicating that the interests of his country are secondary to Islam’s.

It is further telling that such calls are being made now–immediately after a Muslim Brotherhood member became Egypt’s president. In fact, the same reports discussing the call to demolish the last of the Seven Wonders of the Word, also note that Egyptian Salafis are calling on Morsi to banish all Shias and Baha’is from Egypt.

In other words, Morsi’s call to release the Blind Sheikh, a terrorist mastermind, may be the tip of the iceberg in coming audacity. From calls to legalize Islamic sex-slave marriage to calls to institute “morality police” to calls to destroy Egypt’s mountain-like monuments, under Muslim Brotherhood tutelage, the bottle has been uncorked, and the genie unleashed in Egypt.

Will all those international institutions, which make it a point to look the other way whenever human rights abuses are committed by Muslims, lest they appear “Islamophobic,” at least take note now that the Great Pyramids appear to be next on Islam’s hit list, or will the fact that Muslims are involved silence them once again–even as those most ancient symbols of human civilization are pummeled to the ground?

Senator Rand Paul (R–KY) will deliver remarks Wednesday at The Heritage Foundation laying out his ideas for “Restoring the Founders’...