A former Egyptian presidential candidate told Al Arabiya TV in an interview on Sunday that the brutal dragging and beating of a naked man near the presidential palace last week was previously planned by the interior ministry in an effort to terrorize the public. 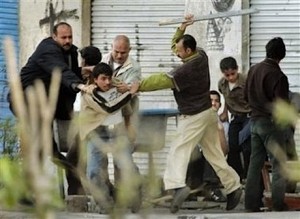 Ahmed Shafiq, who lost the presidential race to Islamist President Mohammed Morsi last year, said the widely circulated video of 50-year-old Hamada Saber was intended to send a message of fear to those protesting in the streets against the brutal reign of the Muslim Brotherhood.

The torture is a “new style of exaggerated terrorism used against the Egyptian citizens that will lead only to violence and hatred of the regime,” Shafiq told Al-Arabiya.

Meanwhile, Saber on Sunday blamed police for the abuse after initially claiming they saved him from protesters.

The presidency described the footage as “shocking”, prompting the interior ministry to order a rare investigation.

While Saber first insisted that police had saved him from protesters, he then changed his account– which was bitterly contested by relatives who said he was being coerced– when prosecutors showed him the video footage, the official MENA news agency reported.

The man, who said he was shot in the foot during the clashes, explained that he initially blamed protesters to “contain the crisis,” the agency reported.

Saber, who has been transferred to a public hospital, said he changed his account and told the “truth” after his family “renounced me…and all of Egypt was angry and people made fun of me on Facebook.”

The main opposition National Salvation Front (NSF) has called for the resignation of Interior Minister Mohammed Ibrahim over Saber’s beating.

The beating was “an inhumane spectacle… no less ugly than the killings of martyrs, which is considered a continuation of the security force’s program of excessive force,” the opposition bloc said, according to AFP.

Ibrahim ordered a probe into the incident and said he would resign if “that’s what the people want,” his office said.

(CNSNews.com) - The State Department took two dramatically different approaches to dealing with the identities of the Diplomatic Security (DS)...