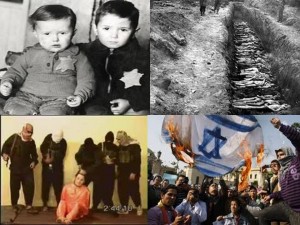 It was reported last May that nearly 70% of Arabs living in Judea, Samaria, and Gaza are in favor of suicide attacks against Israeli civilians and soldiers.

Yes, seven in ten of the so-called ‘Palestinians’ are willing to send their own children to their deaths in the name of Jihad. Why? Why are these people willing to sacrifice the lives of their own kin? The MSM (main stream media) often poses this question, and asserts that because of they are “suffering” in Israel under so-called “occupation,” it is clear that these people are willing to die as ‘martyrs’ out of desperation.

But the 9/11 attacks on America serve as the greatest proof that Israel’s policies or America’s policies in relation to Israel or the Middle East don’t breed terror. When educated middle class Muslims, mostly from Saudi Arabia perpetrate the biggest terror attack in history, it is crystal clear that this isn’t a battle over territory, but a clash of civilizations – a battle between Western democracies and oppressive Jihadist cult members obsessed with death as the ultimate weapon.

So again, why does this martyrdom-obsessed lifestyle flourish?

There are three primary reasons for this phenomenon – ignorance, propaganda, and downright Anti-Semitism, or a combination of the above.

There are Arabs and Muslims in the world who till this day have never had any contact with a Jew –have never seen or met a real life Jew, all they know, is what their leaders tell them via State controlled media, and they aren’t able or willing to truly explore the matter.

Regarding propaganda, both the Palestinian Authority and Hamas are experts in demonizing the State of Israel and the Jewish People. Official television, radio, newspapers, along with their educational systems, summer camps, and mosque sermons spew hateful rhetoric on a daily basis – so much for fulfilling their responsibilities under Oslo to cease the incitement.

Then there is downright Anti-Semitism.  This in itself is most likely a result of the other two phenomena.  Usually we are just talking about the hatred of the Jew but in this case its hatred of Jews disguised as hatred of Israel. Some claim that one can disagree with the policies of the State of Israel but still be a friend of the Jews. But it is these same people that hold Israel to a different, higher standard than any other country in the world when it comes to self-defense, human rights, etc. Holding Israel to a different standard is nothing short of Anti-Semitism, but those that do so in striving to feel better about themselves claim to only be ‘anti-Israel’. Nevertheless their blatant hatred of the Jews is transparent. Now if only more people would stop and pay attention.