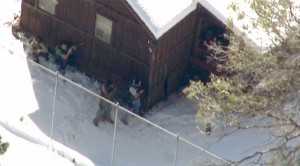 This week was a manhunt never seen before. People are murdered all the time, but murder a police officer and they really come after you. Is it right average citizens do not get the same type of reaction from police when they are harmed? The border was sealed for the first time in decades, every car checked going in and out, teams throughout California, the most wanted man. Two men were killed and a third wounded in a shooting one Saturday night in Pomona in June 2012, the shooter was not the most wanted and tracked throughout the state. Why not, well he victims were not police officers is why.

But then it gets worse, Dorner the most wanted man was trapped in a cabin in Big Bear. What the police do next should be disturbing to any free loving American who believes in the constitution, despite what you think of Dorner.

Police have him surrounded, then the Police start screaming to burn the cabin down, this can be heard in the news report Video below. In a separate clip carried by a local news channel, police are heard to say, “Fu**ing burn this motherfu**er,” and “burn that fu**ing house down.”.

“Alright, we’re gonna go ahead with the plan with the burners,” one officer says.
“Copy,” replies another.
“Like we talked about,” the first officer responds.
“The burners are deployed, and we have a fire,” says another officer moments later, before the police dispatcher repeats the statement.

Within minutes of the fire starting, police note that the cabin is “starting to collapse.”
Police are also heard discussing if they are ready to “bring fire”

The live to police scanner feeds, correlate with the audio from the YouTube clips posted below. Shortly after the chants from ;police to assassinate Dorner smoke was seen rising from the cabin, police then ordered online scanner feeds to be cut and having earlier barred networks like CNN from carrying live footage of the scene and telling journalists not to put out tweets.

The fact that police would burn down the cabin in which Dorner was trapped, in a similar fashion to how the infamous Waco siege ended in 1993 was predictable by the aggressiveness of police this last week. 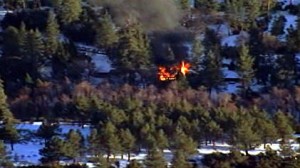 Given the ammunition inside the cabin, LAPD officers knew that the tear gas would lead to a fire and instead of waiting it out, chose instead to carry out a summary execution. Burners” is police slang for tear gas canisters, which are known to cause fires. There is no to excuse for the actions of Dorner, the fact that police now view burning people to death as a reasonable way to apprehend a suspect is shocking and should be bothersome to all.

As Mike Adams writes today, “If the LAPD is going to abandon its mission of public safety and function as an armed vigilante justice squad, dishing out death sentences to those it believes are guilty — without a trial or anything resembling due process — then they might as well throw away all their badges as just call themselves the LA Gang Squad. Because that’s how they’re acting.”

Mission accomplished for the Police, who run its manhunt more like a rampaging street gang than professional police departments.

The Police engaged in a wild, frenzied attempt to execute Dorner. This resulted in officers engaging in the attempted murder of innocent civilians, including one surfer and two women in a pickup truck. (Question: Why are these officers who shot at innocent citizens not being charged with attempted murder?)

Dorner did not engage in RANDOM killings. Want proof? He did not kill his hostages. He let them live because they weren’t on his kill list. Yet the Police did, indeed, engage in random acts of attempted murder. Looking at the situation in retrospect, a typical LA citizen was far more likely to be killed by the Police than by Chris Dorner. Dorner was a selective killer while the Police attempted to kill people indiscriminately.

If you weren’t on Chris Dorner’s kill list, you had nothing to fear from Dorner. But if you were a black man with a bald head, you had everything to fear from the LAPD! And they proved it by opening fire on not just one innocent person, nor two, but THREE innocent citizens who didn’t even resemble Dorner (two of the victims were women, the third was a thin white guy).

None of this justifies Dorner’s actions, of course. Making a kill list and murdering people is no way to handle things in a civilized country… unless, of course, you’re President Barack Obama, in which case you get a bunch of DoJ lawyers to issue a 16-page memo “legalizing” your own private kill list that “authorizes” the murder of American citizens.

That’s where Obama and Dorner are a lot alike: They both believe in the use of violence, outside of law, to kill their enemies. Obama uses armed drones while Dorner used a rifle. Both of them are criminals who operate outside the law, and the only reason Dorner isn’t a national hero right now is because he didn’t have an army of lawyers working at the DoJ who could sanitize his activities by shoveling lawyerspeak manure all over the place.

The Anti-Defamation League (ADL) has expressed outrage that a group of participants in the UNESCO-affiliated Aalst festival dressed as Nazi...