Bloggers have discovered that a fighter jet which Iran had claimed can evade radar systems was superimposed upon snowy mountain peaks using Photoshop, the British Independent reports. 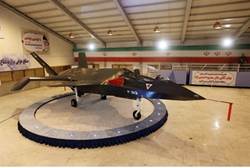 The jet, said to combine the features of the U.S. F-35 and the F-22 fighters, could not fly because it was too small and made of plastic, critics claimed. Lacking rivets and bolts, the plane was a miniature model or a working prototype at best, aviation experts said.

The Iranian Khouz News website published an image of the Qaher-313 in majestic flight, soaring over a mountain peak.

Iranian bloggers, however, spotted that the image of the plane was identical to that issued at the February 2 unveiling in Tehran. The angle of the plane, the reflection of the light and shadows were the same, the Independent reported. 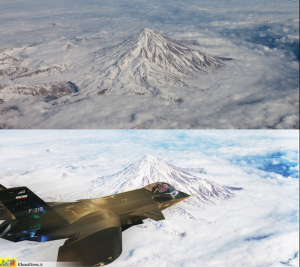 All that had changed was that the image had apparently been superimposed on to a background of Iran’s Mount Damavand, taken from a stock image site and slightly lightened.

Ahmad Vahidi, Iran’s Defense Minister, had claimed that the plane could fly low to avoid radar, carry a weapons payload and was constructed of “high-tech materials”.

However the “faked” flight shot confirmed the view of skeptics such as David Cenciotti, who writes for the Aviationist blog.

Analyzing the initial image released by Iran, Cenciotti said the cockpit appeared to be too small to accommodate a human pilot, and was filled with controls “of a type you expect to find on small private planes.”

The plane appeared to be “nothing more than a large mock-up model made out of plastic”, lacking “the characteristic rivets (and) bolts all aircraft, including stealthy ones, feature,” he said, according to the Independent.

“The air intakes are extremely small whereas the engine section lacks any kind of nozzle: engine afterburners could melt the entire jet,” Cenciotti said.

Israeli experts who looked over the photos of the “radar-evading fighter jet” also cast doubt about its authenticity.

“This is not an airplane, because it does not look like a real airplane,” Tal Inbar, head of the Space Research Center at the Fisher Institute for Air Space Strategic Studies said.

He added, “It may be a model made out of carton, metal, fiberglass or plastic or some kind of other hard material. Iran has no capability to build aircraft. Plain and simple. But Tehran has succeeded in its propaganda campaign. ”

According to Inbar, the plane presented by the Iranians “resembles an old F-5 that was adapted by a director to be in a propaganda film. When you look at close-up shots shown by the Iranians of the inside of the cockpit, you can see it has no avionics. Everything looks like plastic.”

The unveiling of the fighter jet came as Iran marked the 34th anniversary of the 1979 revolution, which replaced the U.S.-backed shah with an Islamic regime.

Iran traditionally uses the anniversary period to showcase military, space and nuclear advances, against a backdrop of international sanctions.

Iranian pronouncements of achievements have increased in recent years, as Tehran desperately aims to prove the West’s embargo on its military, technology and economy have failed to dent its determination.

On January 28, Iran claimed it sent a monkey into space to an altitude of 120 kilometers for a sub-orbital flight, challenging Security Council sanctions against the development of its ballistic program.

Later reports indicated that the “space monkey” may have been made up.

Images from a press conference billed as a hero’s welcome for the monkey showed the animal that was sent into space as having light fur and a distinctive red mole over its right eye. The monkey that supposedly returned from space, however, was dark haired and had no mole.