Iran has no intention of developing nuclear weapons but if it wanted to, the United States could not thwart it, its supreme leader said on Saturday. 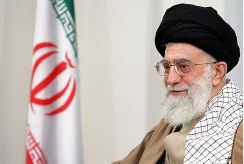 “We believe nuclear weapons must be abolished and we have no intention of building” such weaponry, Ayatollah Ali Khamenei said in remarks posted on his website leader.ir and which were quoted by AFP.

But, Khamenei said, “if Iran had such intentions, the U.S. could in no way prevent it” from building an atomic bomb.

The West and Israel suspect the Islamic Republic is masking the development of a nuclear weapons capability under the guise of a program Iran insists is purely aimed at peaceful purposes.

In his State of the Union address this week, U.S. President Barack Obama urged Iran to “recognize that now is the time for a diplomatic solution” to the nuclear standoff.

“And we will do what is necessary to prevent them from getting a nuclear weapon,” Obama said.

On Friday it was reported that during the talks, the West plans to offer to ease the sanctions barring trade in gold and other precious metals with Iran in return for Iranian steps to shut down the Fordow uranium enrichment plant.

Decisions about Iran’s disputed nuclear drive rest with Khamenei, who has issued a fatwa (Islamic religious ruling) declaring that possession of atomic weapons is a “sin” banned by religion.

Khamenei on Saturday repeated that claim, saying Iran’s stance on weapons of mass destruction was not taken “because the U.S. is unhappy, but because it is based on a religious belief that nuclear weapons are a crime against humanity.”

Iran has spurned UN Security Council demands to abandon its uranium enrichment programme, a process that can be used for peaceful atomic purposes as well as for making the core of a nuclear bomb.

Obama to be Honored ‘Out of Respect for American People’

President Barack Obama will be received by the State of Israel with all appropriate honor, “out of respect for the...