President Barack Obama will be received by the State of Israel with all appropriate honor, “out of respect for the American people and for the bond between Israel and the United States,” says Israel’s chief of diplomacy. 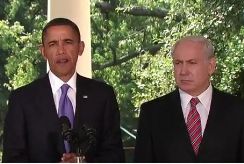 “We have an interest in stressing the deep bonds between the United States and the State of Israel,” Seaman told Hasten.

“President Obama is the president elected by the American people,” he reminded listeners, “and therefore out of respect for the American people and for that bond between Israel and the United States he will be received here with all the respect and honors which the State of Israel knows how to give,” Seaman said.

There has been much speculation regarding how Prime Minister Binyamin Netanyahu will get along with the U.S. president during his expected visit to Israel next month, as the relationship between the two is at best rocky.

Netanyahu’s first visit several years ago at the White House during Obama’s first term was marked by a rude display of public disrespect by the American leader in which he abandoned the Israeli prime minister to wait in the White House while he went off to enjoy a private evening meal alone with his family.

Netanyahu was subsequently escorted from the White House through a side door, rather than openly through the front — a further humiliation that left unpleasant memories with which both leaders have since been forced to contend.