Prime Minister Binyamin Netanyahu warned of the dangers posed by a nuclear Iran and by Syria’s chemical weapons arsenal, in a speech to the Jewish Agency Board of Governors on Monday. 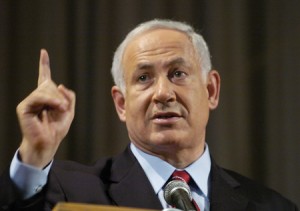 In his speech Netanyahu referred several times to remarks made by Jewish Agency chairman Natan Sharansky in a speech he gave before Netanyahu.

Regarding Iran and the threat it imposes over Israel, Netanyahu said that the designs of the enemies of the Jewish people have “not changed with the rise of the Jewish state. That is the millennial desire of the enemies of the Jews, fired by Jew hatred in antiquity and medieval times and in modern times to eradicate the Jewish people. That has not changed. It may have taken a back seat for a few decades after the Holocaust, it was politically improper, but it has come back with full force, in the renascent Islamist anti-Semitism, the anarchist left and that strange bond between them that you’ve spoken about many times, and also in the failure of those who should know better to stand up against the de-legitimization of Israel.

“And we should expose it, we should speak out against it, and I know you (Sharansky -ed.) do and I do and we should do so more often, because there’s nothing short of an effort to eradicate the Jewish state, and we should be clear about that, that is spearheaded first by Iran. Iran makes no bones about it, it is developing nuclear weapons with the expressed purpose of destroying the Jewish state, and I think this is the foremost challenge of the next government that we will form.

“I think as in the other instances, what is directed, the hatred that is directed against the Jews threatens the rest of the world, but the rest of the world doesn’t see it,” said the Prime Minister. That is also a repetition of history.  But I think that the development of nuclear weapons by Iran will be a pivot of history, will change the balance of power irrevocably in the world.

“When people with unlimited ambitions of aggression get unlimited weapons, what they believe are weapons of unlimited power, the demon is uncorked, and it’s happened before. Up to the point when they think that they’ve got the power to work out their mad designs, up to that point, they’re careful, even though they can be quite aggressive and they are, they can use terror and they can use subterfuge and they can use many other acts of violence, but this is nothing compared to the point where they think they’ve assumed the critical mass of power necessary to carry out their fantasies. This is the greatest mistake of history – to assume that people will behave rationally when they’re fundamentally irrational when you give them the power of mass death. Iran is seeking the power of mass death, and it’s enough to see what they’re doing now to realize what they’ll do then. Because what they are doing now is conducting a worldwide web of terror – brazen, unabashed, across a dozen countries.

“That number is growing every day, with their henchman, Hizbullah – they’ve just been exposed in Bulgaria, but they’re exposed everywhere. Governments know it, they know it, but they don’t call it like it is, and I congratulate Bulgaria for doing so. You should congratulate them too. And in addition what they’re doing, they’re conducting a brazen campaign of cyber attacks against everyone – against Israel, against the United States.

“This is the unseen attack, but it’s felt and it will be felt more and more,” said Netanyahu. “And they’re arming their tentacles, their poisoned tentacles of Hamas and Islamic Jihad and Hizbullah with tens of thousands of rockets and deadly weapons. They’re threatening, I believe, not only the security of Israel but the security of every regime in the Middle East, and certainly the flow of oil from this region.  And certainly their development of nuclear weapons will spark a nuclear arms race. It will make the Middle East a nuclear tinderbox. It will change the world. We’ve not seen anything like it. We’ve not seen since the advent of nuclear weapons a power that could contemplate using those weapons with happy abandon – they say so. Nobody has said so since the Cuban missile crisis, over a half a century ago.  Nobody has said that.

Netanyahu warned that even further, tougher sanctions will not stop Iran from its nuclear ambitions.

“They say it. They move forward. They’re progressing. They’re getting closer to the red line that I had set at the UN,” he said. “They’re building rapid centrifuges: that is centrifuges that enrich the uranium needed to make nuclear bombs at three times the pace so that they could cross that red line and get to a high enrichment to a sufficient amount of 90% enriched uranium within a much shorter time. They’re doing all that. So far, they’ve not been stopped.  And the sanctions themselves – even tougher sanctions – will not stop them.

“Case in point, North Korea. Have tough sanctions stopped North Korea? No. And the fact that they produced a nuclear explosion reverberates everywhere in the Middle East, and especially in Iran. They say, “Where is the world? Where is the international community? Where is the tough response?” It’s a question that everybody deserves to ask. Sanctions alone will not stop the nuclear program of Iran.  They have to be coupled with a robust, credible military threat. If they are not, there’s no chance to stop it. If they’re coupled with that military threat, there is a chance to stop it. And if it doesn’t stop it that way, then it will have to be stopped another way. But the world has to decide whether it allows this terror regime that breaks all norms to have access to atomic bombs.

“I believe that stronger sanctions must be combined with credible military means, and I believe that stopping Iran is the number one goal of anyone seeking peace and security in the world.  It’s certainly the number one topic that President Obama and I will talk about in our upcoming meeting here, which I attach great importance to. I look forward to welcoming President Obama here in Israel, and we have said together that this is item number one,” said Netanyahu.

He then added, “Item number two is Syria. There’s a humanitarian disaster going there. There are over 60,000 people who have butchered. Some of them need medical treatment. The other day, we took some wounded prisoners in, just out of a humanitarian concern, but it’s important to understand that Syria could also be a strategic disaster. It is an underdeveloped country. Its GDP per capita is a few thousand dollars at best. But it contains the most lethal weapons on Earth, short of nuclear weapons. It’s got chemical weapons; it’s got advanced anti-aircraft missile systems that are the most advanced in the world; it’s got other deadly weapons that could threaten not only Israel, but threaten the United States and its allies. Some of them are the most sophisticated weapons ever built. And those weapons will be up for grabs if the Syrian regime collapses. Israel can’t sit idly by and see these weapons transferred to Hizbullah or other terror groups.  So we will do whatever is necessary to defend ourselves.”

Netanyahu also said that Israel needs “to seek a realistic peace with our Palestinian neighbors: realistic because we understand the territories that we vacated have been taken over by the forces I’ve just described. We walked out of Lebanon and we’ve got an Iranian proxy, Hizbullah, armed to the teeth, firing rockets on our country. We walked out of Gaza and we’ve got an Iranian proxy, Hamas, armed to the teeth, firing rockets into our cities. We can’t afford to do this a third time, so we need a peace process and a peace result that gives us peace and gives us security; and that is not achieved by merely signing a piece of paper. Peace treaties in themselves do not guarantee the continuity of peace.  Just think about that. I could give you a case in point, but you can imagine it yourself.

“So in addition to a piece of paper, we need actual security on the ground. This means that when we speak about our Palestinian neighbors, we must have a credibly, thoroughly demilitarized Palestinian state. We have to have that. Otherwise, we’ll have a replication of what happened in Lebanon and in Gaza. And this is not a simple task. It requires very, very stringent conditions, and it requires very tough negotiations.

“And the second thing is: we want to have a peace that is based on mutual recognition,” he added. “Mutual recognition means not only that we recognize them, but that they recognize us. We have the Jewish nation-state of Israel here. It’s high time that the Palestinians recognize that. It doesn’t that it will percolate from the top down. For that we need security. But that’s a necessary understanding, that we have here the nation-state of the Jewish people. That it’s not going to be bifurcated or trifurcated into various zones, various autonomies. This is the state of the Jews. The ability to have any Jew come here is fundamental to our existence. The ability to have our national symbols, our holidays, our history, our culture – that is fundamental. It’s a nation-state. It cannot be dissolved. So the conflict has to be resolved with the solidity of the Jewish state ensured, both in terms of recognition and also in terms of security arrangements.

“This is something we’re prepared to move on. It’s difficult. It’s not easy to get into these negotiations, because as I’ve just described it, it’s only Israel that has to make concessions. Everybody knows that.  Everybody speaks about that. It’s the Palestinians who will have to make concessions too. That’s part of the world, and that’s part of a genuine, workable and durable peace, even though it’s not raised like that. But I raise it like that. I call it like it is, and it’s a difficult task,” he said.

Netanyahu stressed that he places “no conditions on entering the negotiations. I have a clear idea of what has to be done to achieve a workable peace. I’m prepared to do it, but I don’t place any conditions on entering negotiations. Would that this were true on the Palestinian side. They’ve done nothing but place condition upon precondition upon precondition for entering the talks. I don’t think we should spend or waste another four years negotiating about the negotiations. I think we should just get on with it. And I view President Obama’s visit here, along with Secretary Kerry, as an opportunity to reset this and get back to the business of genuine negotiations – direct, unimpeded negotiations without preconditions between Israel and the Palestinians. That’s the way to proceed towards peace.”

Stanley Fischer to Take Over US Federal Reserve?

What’s next for Stanley Fischer, who is stepping down as governor of the Bank of Israel? Washington officials are already...