Torture, persecution of Christians no longer reserved for Islamic nations.

Authorities in New Jersey arrested a Muslim man who beheaded two Coptic Christians, burying their bodies and heads and hands in separate graves near Philadelphia, bringing the horror of the persecution of Christians in Islamic nations to the United States.

According to New York’s WABC-TV, the Muslim was identified as Yusuf Ibrahim, 28. He was taken into custody after the bodies were found.

The report said investigators said Ibrahim killed the victims then severed their heads and hands, and buried the remains in the back yard of a home in Buena Vista, N.J.

The report said the victims were from the Coptic Christian community in the area. One of the victims had come from Egypt not many years ago.

While the report said police did not indicate a motive, friends of the victims wondered if it was something to do with religion.

The report said police described the suspect as “ruthless” and “calculating” and “Muslim” and they said he belongs behind bars.

Pamela Geller, who blogs about Islam at Atlas Shrugs, said it “appears to have been a ritual killing, religious in nature.”

“The killing evokes this passage in the Quran: ‘When thy Lord was revealing to the angels, ‘I am with you; so confirm the believers. I shall cast into the unbelievers’ hearts terror; so smite above the necks, and smite every finger of them!” – Qu’ran 8:12.”

Samy Hohareb, a friend of the victims, said, “I leave it for the police and the investigation.” 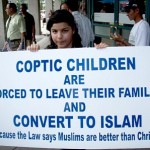 The New York Daily News reported Ibrahim was nabbed by detectives on Sunday after the bodies were found.

Authorities said the suspect was found driving a white Mercedes Benz that belonged to one of the victims.

Ibrahim was being held at the Atlantic County jail on charges of murder and desecration of human remains.

Reported in September a Muslim jihadi writer praised the murderer of a Dutch filmmaker and suggested beheading as a way of curbing criticism of Islam. The report came from the Muhib Ru’yat al-Rahman, a senior writer of a leading jihadi forum called Shumoukh al-Islam, suggested that Muslims living in Denmark, Germany, the Netherlands and the U.S. kill Westerners who criticize Islam and display their decapitated heads along roads, according to the Jihad and Terrorism Threat Monitor, a unit of the Middle East Media Research Center.

“While expressing respect for those calling to boycott European and American products over the release of the film ‘Innocence of Muslims,’ which negatively depicts Muhammad, Muhib insists that the best way to deter people from insulting Muhammad and his wives is to implement his proposal,” the  report said.

The writer praised Dutch-Moroccan Muslim Muhammad Bouyeri, who killed Dutch film-maker Theo Van Gogh in 2004 over the production of “Submission,” a film criticizing Islam’s treatment of women. Dozens of forum members praised the post, expressing their agreement with the writer’s suggestions, the report said.

She has waged a battle in New York, Washington and other cities to post a pro-Israel ad after numerous pro-Palestinian ads already have appeared.

Photo credit: Venezuelan Presidency/ZUMA Press/Newscom In the early morning of February 18, Venezuela’s President Hugo Chavez tweeted that he was...