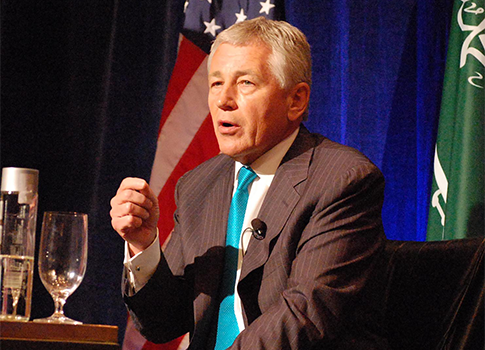 The Embassy of India chided secretary of defense nominee Chuck Hagel late Monday for suggesting in a previously unreleased 2011 speech that India has “for many years” sponsored terrorist activities against Pakistan in Afghanistan.

“India has over the years financed problems for Pakistan” in Afghanistan, Hagel said during a 2011 address on Afghanistan at Oklahoma’s Cameron University, according to video of the speech obtained by the Washington Free Beacon.

A spokesperson for the Embassy of India told the Free Beacon that Hagel’s remarks are not grounded in “reality.”

“Such comments attributed to Sen. Hagel, who has been a long-standing friend of India and a prominent votary of close India-U.S. relations, are contrary to the reality of India’s unbounded dedication to the welfare of the Afghan people,” the spokesperson said to the Free Beacon in an email.

“India’s commitment to a peaceful, stable and prosperous Afghanistan is unwavering, and this is reflected in our significant assistance to Afghanistan in developing its economy, infrastructure and institutional capacities,” the spokesperson said. ”Our opposition to terrorism and its safe havens in our neighborhood is firm and unshakeable.”

Hagel’s comments also appear to run counter to the official U.S. policy regarding India and Afghanistan, the spokesperson said.

“India’s development assistance has been deeply appreciated by the people and the Government of Afghanistan, and by our friends around the world, including the United States,” the embassy statement said. “We do not view our engagement with Afghanistan as a zero sum game.”

“India and the United States have a shared perspective and a deep convergence of interests for ensuring peace and stability in Afghanistan,” the spokesperson added. “We will continue to work to help the Afghan people build a peaceful, prosperous, democratic and inclusive future for themselves in an environment free from terror and intimidation.”

“It’s both over-the-top and a sharp departure from a U.S. position that has seen democratic India as a stabilizing influence in Afghanistan and Asia more broadly,” Sadanand Dhume, former India bureau chief at the Far Eastern Economic Review and current resident fellow at the American Enterprise Institute, told the Free Beacon.

“It’s also exactly the sort of statement that would have frayed ties with New Delhi, which has been watching the U.S. withdrawal from Afghanistan with concern,” Dhume said, referring to the administration’s plan to remove most military forces from the war-torn country in the coming months.

Hagel also stated in his 2011 remarks that India intentionally has fueled tensions with Pakistan.

“India for some time has always used Afghanistan as a second front, and India has over the years financed problems for Pakistan on that side of the border,” Hagel said in the speech. “And you can carry that into many dimensions, the point being [that] the tense, fragmented relationship between Pakistan and Afghanistan has been there for many, many years.”