A blockade is only as strong as its weakest link.

Until recently, all kinds of goods passed through Egypt’s Rafah’s crossing, through smuggling tunnels, and even the Kerem Shalom crossing with Israel.

But for Hamas, the situation took a turn for the worse (more on that below) prompting it to kick out the PA-appointed business operating the Palestinian side of the crossing and replacing it with its own management (all described by YNet).

Which brings us to NPR.

In a dispatch from Gaza (transcript and audio) Larry Abramson talked to plenty of Palestinians claiming they’re besieged; he also quoted (and confirmed) what Israeli officials had to say. But he inexplicably overlooked the Hamas take-over of Kerem Shalom, and at the end of the report, Abramson had the gall to state in his own voice:

Two pounds of strawberries sells for under a dollar; they can cost three times that much in Israeli cities. And that, of course, is the point of the Israeli sanctions — to starve this Hamas-run territory of resources. 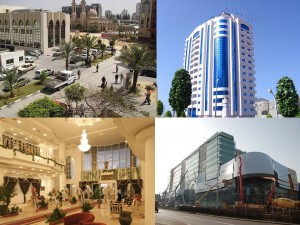 The blockade is unfortunately necessary for Israel because Hamas hasn’t abandoned its goal of destroying Israel. It’s not about grinding Gaza’s exports into the dust.

Egypt began flooding smuggling tunnels with sewage to halt the flow of weapons entering the Sinai. And Israel closed the Kerem Shalom crossing following last week’s rocket fire. (The crossing was due to re-open). But with money from smuggling taxes nosediving, Hamas changed the equation by simply taking over Kerem Shalom.

Today’s Times of Israel also reports Hamas is forcing Gazans to obtain a “visa” to travel to the West Bank or Israel, though there’s no word yet on possible fees.

Israel won’t cooperate with Hamas-linked entities. And Israel has nobody on the Palestinian side to coordinate security issues at the sensitive crossing. On various occasions, the crossing has been directly attacked by suicide bombers, Sinai jihadis, and mortar fire.

The power struggle threatened to unravel recent Israeli concessions. Among them listed by COGAT (Coordination of Government Activities in the Territories):

• Entry of 100 aggregates trucks per week was approved for the private sector.

• Expanding the number of new vehicles approved for export to the Gaza Strip (from 100 to 125 vehicles per week).

But the dirty little secret Abramson won’t acknowledge is that the blockade is a bigger necessity for Hamas. And it’s not just because its taxes and protection racket with the smuggling industry rake in a cool $1 million a day.

No matter how many goods pass through tunnels or international crossings, the presence of a “blockade” gives Hamas an opening to play the victim.

Egyptian moves against the tunnels indicate that even the Muslim Brotherhood isn’t buying Palestinian victimization, which is Gaza’s biggest export of all.

The House version of the continuing resolution (CR) — necessary to fund the government through the end of the fiscal...