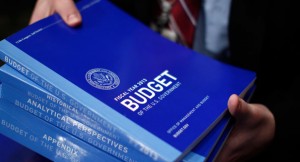 It’s time for Congress to make a real budget—and not just any budget.

It’s been four years since the U.S. had a real budget. While the House of Representatives has passed budgets, the Senate has stopped each one. Instead, the Senate under Majority Leader Harry Reid (D-NV) has done short-term, stopgap measures to keep the government funded year after year.

But this year, Reid and others have said they are going to step up and do their job.

The President’s budget is already late—by two months—and will not appear until early April, according to the White House. To get things started, House Budget Committee Chairman Paul Ryan (R-WI) will unveil his fiscal year 2014 budget tomorrow.

Heritage’s Alison Acosta Fraser and Patrick Louis Knudsen, the Grover M. Hermann Senior Fellow in Federal Budgetary Affairs, have a blueprint for what that budget should look like if we are to have any hope of reclaiming economic growth and digging out of the hole we’re in. They make the case that the budget should do six things.

1. Balance. Achieve balance within 10 years, and stay in balance.

Why? Put simply, we can’t keep spending more money than we take in. Anyone who has paid a credit card bill knows that that bill just keeps getting larger and larger until you start living within your income. If we as a country don’t get our budget into balance within the next 10 years, government is going to swallow nearly all of the economy—leaving us all with a disaster, but especially today’s children.

Why? The Pentagon has waste and inefficiencies like every other government agency, and these should be ferreted out. But President Obama has already been shrinking our military capabilities, and this can’t continue if we are going to defend ourselves. North Korea’s recent nuclear threats are a reminder that our forces must be modernized and ready at all times.

Why? The major entitlements are the primary reason America has a budget problem. They are growing every year, and this growth is unsustainable. The levels of benefits will have to be cut abruptly if these programs are not reformed to keep them around for the next generation.

Why? We haven’t begun to see the real impact of Obamacare’s new spending, because many of its largest provisions go into effect in 2014. Obamacare spends $1.8 trillion just in the next 10 years. All of these costs, and Obamacare isn’t going to improve patient care—it’s only going to make things worse.

Why? The federal government has overreached into every area of Americans’ lives. Functions like transportation and education need to be returned to the states and localities so that the people closest to the services can have more say in how they are run.

Why? Economic growth is the goal. A better economy means people are employed, they are advancing, and they are making more money. That’s why the government actually takes in more in taxes when times are good—people make more money and pay more taxes. Tax reform does not mean closing tax preferences (“loopholes”) to raise revenue. True tax reform is revenue neutral. Any revenue raised by eliminating tax preferences should be offset by lowering tax rates. The code should encourage saving and investment, the essential elements of sustainable, long-term growth.

All of these things are possible. The Heritage Foundation has laid out the way to accomplish them in the Saving the American Dream plan.

Read the Morning Bell and more every day en español at Heritage Libertad.

Chinafotopress/ZUMApress/Newscom Chinese hackers have infiltrated the popular Internet messaging service Skype. The hackers have modified the operation of Skype so...