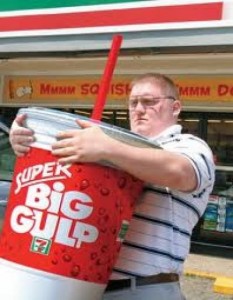 New York City’s ban on big sugary drinks has been struck down just one day before it was set to take effect.

Justice Milton A. Tingling Jr. said the ban was “arbitrary and capricious,” because it exempts some drinks – for instance, those with a high milk content. It also treats convenience stores differently from restaurants – so under the ban you could still buy a Big Gulp from a 7-11, but not from a MacDonalds or a Subway. Also, the ban allows refills – so you would still have been able to take your 12oz cup and refill it as many times as you like.

The judge was also concerned that the Big Gulp ban would promote Big Government. It would “create an administrative Leviathan,” he wrote.

The decision is a huge setback for Mayor Bloomberg, who pushed the ban as part of a large-scale public health campaign.

You can view the full texts of the judge’s ruling here.

In Case You Missed It:  IT WAS ALL A LIE: CNN Political Hack Finally Admits the US Has Been Vastly Overcounting COVID Deaths and Hospitalizations
Posted in Freedoms and tagged Freedom, New York, New York City Mayor Michael Bloomberg.

The Dutch daily NRC writes that Mehmet Sahin, a doctoral student, has had to go into hiding with his family....