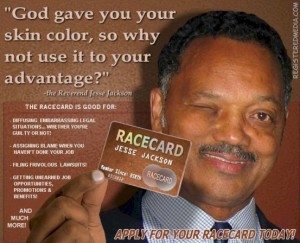 Congressional Black Caucus to President Barack Obama – “The people you have chosen to appoint in this new term have hardly been reflective of this country’s diversity.”

So said Marcia L. Fudge, oblivious to the irony that such a statement would be coming from her; she’s the chairwoman of the Congressional Black Caucus, a group the diversity of whose members ranges from light-skinned black to dark-skinned black. That is the extent of the level of diversity within the CBC.

Even the Congressional Hispanic Caucus has more diversity. Visit the CHC’s Wikipedia page and click on each of the pages for the 21 current members (all of whom are Democrats, by the way, as only a Democrat would be so segregationist). You will find that at least half of them look white. The only thing Hispanic about them is that their names sound like Taco Bell meals. (I can say that because I’m part Cuban.)

Marcia Fudge, who does engage in such segregation, feels offended that President Obama hasn’t nominated anyone to any cabinet positions who can “speak to the unique needs of African Americans.” She wrote a letter to Obama to express her racist desire for Obama to start discriminating against whites.

A White House spokesman responded to the letter from the Congressional Black Caucus by saying, in part, “The President is deeply committed to diversity in his cabinet and ensuring his Administration reflects the breadth of our country.”

Because the rep said President Barack Obama is committed to diversity, we can deduce that “ensuring his Administration reflects the breadth of our country” means ensuring every racial group is featured in proportion to its demographics in the country.

If this were really President Obama’s goal–and of course it should not be, and I don’t believe it is–every group of 100 people in his administration would consist of 72 whites, 13 blacks, 5 Asians, and one lone Elizabeth Warren (Native American).

Decisions as to who will be advising the leader of the country should not involve such trivialities as the melanin level in someone’s skin. The only considerations should be competence, wisdom, knowledge, and the desire to uphold the Constitution.

Family Fact of the Week: The Feminine Mystique and Feminists’ Mistake

Mario Ruiz/ZUMA Press/Newscom Among the landmarks in the 2013 Women’s History Month is the 50th anniversary of the publication of...