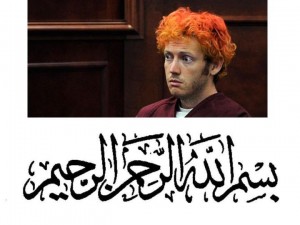 The Daily Mail is reporting that James Holmes, the infamous murderer who opened fire on a crowded movie theater in Colorado, has converted to Islam. I’ll have to see a few more sources reporting this story before I start taking it seriously. But we’ll see what happens.

James Holmes, the gunman behind the Dark Knight massacre in Colorado last July, has reportedly turned Muslim and prays five times a day.

The killer showed off a lengthy, thick beard during a court appearance earlier this month, and a prison source has claimed it is a symbol of his new-found faith.

The source said Holmes has turned to Islam as a way of justifying his horrific murder spree in an Aurora, Colorado cinema on July 20 which left 12 people dead and 58 people wounded.

‘He has brainwashed himself into believing he was on his own personal jihad and that his victims were infidels,’ a prison source told the National Enquirer.  Holmes is smarter than we think. He has found a way to justify his violent behavior and the liberal media might stop reporting on him now to not hurt the feelings of a Muslims. 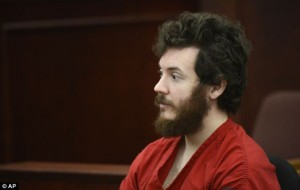 He now prays five times a day, sticks to a strict Muslim diet and spends hours each day studying the Qur’an, the source said. Holmes sported a thick, bushy beard and unkempt dark brown hair during his appearance earlier this month – a stark difference to his bright orange hair at the time of the massacre

Holmes is charged with 166 counts, mostly murder and attempted murder, in the assault on moviegoers at a midnight showing of The Dark Knight Rises in Aurora.

On the night of the attack, prosecutors say he donned a police-style helmet, gas mask and body armor, tossed a gas canister into the seats and then opened fire.

The judge entered a not guilty plea on his behalf earlier this month. In the nearly eight months since Holmes first shuffled into court, neither he nor his lawyers have said much about how he would plead.

If  Holmes is convicted, he could be executed or spend the rest of his life in prison.

The Obama administration through the Department of Homeland Security program intends to give "trusted traveler" status to low-risk airline passengers...