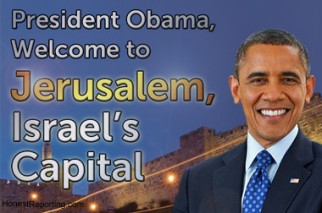 With President Barack Obama touching down in Jerusalem for his first official visit to Israel, the Middle East is once again the top story in the international press.

While most media reports ahead of the visit noted the Obama administration’s desire to “reboot” relations between the US and Israel, there are a number of issues that often come up whenever some of media report on Israel in the diplomatic arena.

The following are five of the main media spins to watch for in coverage of the Obama visit.

1. Settlements are the biggest obstacle to peace.

One of the most persistent media themes since the early days of the Obama administration is that the peace process has stalled because Israel refuses to stop building in Jewish settlements in the West Bank.

The idea gained steam in Obama’s first year as president and the media has maintained the narrative ever since. Often ignored is the fact that Israel implemented a 10-month freeze of settlement activity – and the fact that it failed to make any impact on peace talks. The AP got the facts straight, however, noting that the Palestinians did not take advantage of the freeze.

The claim that Israel is responsible for the impasse, however, is likely to show up in coverage of Obama’s visit. Reviews of Israeli-US relations during the Obama years are likely to discuss settlements as a cause of friction between the allies, strongly implying that peace talks have been on hold because of Israel’s refusal to implement a freeze.

But as Bret Stephens of the Wall Street Journal aptly put it, the issue is largely beside the point.

I’d like to hear the president tell Palestinians during his visit to Bethlehem that what really stands between them and a state isn’t Israel or its settlements. Israel dismantled its settlements in Sinai for the sake of peace with Egypt, and dismantled them again in Gaza in the interests of disengaging from the restive coastal strip. Most Israelis would gladly do so again for the sake of a real peace with the Palestinians.

Another theme that has appeared repeatedly in the news for the past few years is the claim that Israelis no longer care about peace with the Palestinians, either because life in Israel is just fine without it or because Israel is simply not prepared to make the sacrifices that would be required.

The issue was most prominently expressed in Time magazine in 2010 and has appeared, in various forms and with some regularity, ever since.

What tends to be missing in media accounts of Israeli attitudes towards peace is the status of the peace partner. Israeli opinion polls consistently show that Israelis support efforts to reach a genuine and stable peace, but don’t believe that there are prospects for an enduring peace with the Palestinians on the horizon.

As Bret Stephens stated in the op-ed quoted above, there is good reason for the Israeli skepticism:

Israelis can have no confidence in such a peace so long as Palestinians elect Hamas to power, cheer the rocketing of Israeli cities, insist on a “right of return” to Tel Aviv and Haifa, play charades at the U.N., refuse to negotiate directly with Israel, and raise their children on a diet of anti-Semitic slurs. In his 2009 speech in Cairo, Mr. Obama spoke the truth about the Arab world’s Holocaust denial. He shouldn’t deprive his Palestinian audience of a similar dose of truth-telling, least of all in Bethlehem.

Watch for news reports that place the full responsibility for the stalled peace process on Israel. If the media fail to take into account the lack of effort on the other side, they are perpetuating a distorted picture of the region.

Although the new Israeli government has been in power for only one day before Obama’s visit and contains more moderates than the government it replaces, media reports are likely to focus on the policies of its most hawkish members – and to suggest that it’s not a government suited to peace with the Palestinians.

Indeed, it is a government that was elected for a decidedly domestic agenda, not for diplomacy.

And the government is still headed by Prime Minister Benjamin Netanyahu, who has repeatedly been maligned as being uninterested in peace despite numerous statements to the contrary.

After quoting Netanyahu’s conciliatory statements to the Palestinians during the swearing in ceremony for his new government, the paper immediately casts doubt on prospects for peace.

“With a Palestinian partner that is ready to conduct negotiations in good faith, Israel will be ready for a historic compromise that will end the conflict with the Palestinians once and for all,” Netanyahu [said].

Still, key positions in his new government are held by strong backers of Israeli settlement in the West Bank, an issue that has stymied efforts to restart peace negotiations.

The paper follows with a list of past statements from members of the government in support of settlements.

Too often, the media gives the impression that Netanyahu’s peace statements are not genuine. The same level of critique, however, is never applied to his Palestinian counter-parts.

4. The Israeli-Palestinian conflict is the Mideast’s core problem.

The events of the Arab Spring in a place like Egypt, or the Arab Winter in areas such as Syria and Libya, should have closed the book on the argument that the Israeli-Palestinian conflict is the key to all Middle East affairs.

As one Arab state after another saw its citizens rise up against their oppressive leaders, the real problems at the heart of the Arab world were revealed, and they had nothing to do with Israel.

Some media outlets, however, refuse to give up on the long-held belief that solving the conflict between Israel and the Palestinians will have a ripple effect on the rest of the region. Haaretz put its own twist on the issue, opining that with the instability in Syria and beyond, the long held view that the Israeli-Palestinian track can become an instrument for calming the area, soothing antagonism towards the U.S and even assisting in the formation of a U.S.-led anti-Iranian coalition, is bound to become doubly attractive.

World leaders, including Jordan’s King Abdullah, are also reluctant to give up on the idea.

It wouldn’t be surprising if some media attempt to link Obama’s visit with the view that reviving the peace process has global implications. It will be harder for them to prove, however, how peace between Israel and the Palestinians will calm the civil war in Syria.

5. Over-hyping tensions between Obama and Netanyahu.

It’s no secret that relations between Obama and Netanyahu have been cool at best, and even somewhat hostile at times.

But despite the obvious tensions between the two in the past, it’s still possible for the media to overplay the issue. Allies have disagreements over policy,but it’s not for the media to sensationalize the issue for the sake of higher newspaper sales.

The Obama administration has been careful to avoid pressuring Netanyahu publicly on peace or Iran, at least during the run-up to the visit. To focus on past relations between the two leaders as one of the main story lines of the visit would be lazy journalism.

Don’t let the press distort the meeting between Netanyahu and Obama so that it fits one of the pre-packaged narratives peddled by the media. And if you see any of the above news spins, be sure to lodge your complaint with the news outlet.

In Case You Missed It:  Swalwell Plays Ridiculous Recording of Man with Fake Southern Accent ‘Threatening to Kill His Three Children’ – And No One is Buying It (AUDIO)
Posted in Israel, Tyranny and tagged Freedom, HonestReporting, Islam, Israel, Jihad, Judea and Samaria, Obama, Palestinians, Terrorism.

Newscom President Obama is in the Middle East this week, two years and three months after Tunisian street vendor Mohamed...