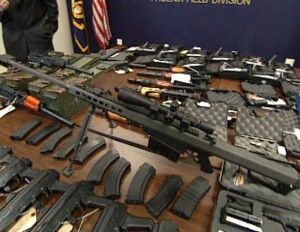 Californian Congressman Doug LaMalfa and 14 of his House peers have written a letter to the Department of Homeland Security demanding to know why the federal agency is buying so many rounds of ammunition.

Huelscamp promised to keep asking and even threatened to back a move to defund the agency if answers were not forthcoming.

Last Friday, New Jersey Congressman Leonard Lance also indicated that he would pursue an explanation as to why the DHS is engaging in an arms build-up.

“I think Congress should ask the Department about both of those issues and I would like a full explanation as to why that has been done and I have every confidence that the oversight committee ….should ask those questions,” said Lance, adding that he shared a belief, “that Congress has a responsibility to ask Secretary Napolitano as to exactly why these purchases have occurred.”

The AP report regurgitated claims by the federal agency that the bullets were bought in bulk to save money and were for training purposes only.

However, as former Marine Richard Mason told reporters with WHPTV News in Pennsylvania earlier this month, hollow point bullets (which make up the majority of the DHS purchases) are not used for training because they are more expensive than standard firing range rounds.

“We never trained with hollow points, we didn’t even see hollow points my entire four and a half years in the Marine Corps,” Mason said.

KOBI GIDEON/G.P.O./SIPA/Newscom President Obama wowed his youthful audience in Israel on Thursday. Having arrived on Wednesday with a mere 10...