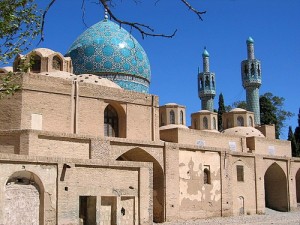 Muslims turned an Islamic mosque in suburban Cairo into a torture chamber for Christians who had been demonstrating against the ruling radical Muslim Brotherhood in the latest case of violent persecution that experts fear will only get worse with Islamist now in control of the country all thanks to Obama.

Such stories have become increasingly common as tensions between Egypt’s Muslims and Coptic Christians mount, but in the latest case, mosque officials corroborated much of the account. Demonstrators, say they were taken from the Muslim Brotherhood headquarters in suburban Cairo to a nearby mosque on Friday and tortured for hours by religion of peace members.

They accompanied me to one of the mosques in the area and I discovered the mosque was being used to imprison demonstrators and torture them,” Amir Ayad from a hospital bed said. He is a Coptic Christian has been a vocal protester against the fundamentalist Islamic regime Obama helped to put in power.

Ayad said Muslims beat him for hours inside the Mosque with sticks before being left for dead on a roadside. Amir’s brother, Ezzat Ayad, said he received an anonymous phone call at 3 a.m. Saturday, with the caller saying his brother had been found near death and had been taken to the ambulance.

“He underwent radiation treatment that proved that he suffered a fracture in the bottom of his skull, a fracture in his left arm, a bleeding in the right eye, and birdshot injuries,” Ezzat Ayad said.

The Bilal ibn Rabah Mosque in the Cairo suburb of Moqattam, was turned into the torture chamber just hours after Friday prayers.

The latest crackdown is further confirmation that the Muslim Brotherhood’s most hard-line terrorist elements are consolidating control in Egypt, according to Shaul Gabbay, a professor of international studies at the University of Denver.

“It will only get worse,” said Gabbay. “This has been a longstanding conflict, but now that the Muslim Brotherhood an Islamic terrorist organization is in power, it is moving forward to implement its Islamic ideology – which is that Christians are supposed to become Muslims or be killed.

“There is no longer anything to hold them back,” he continued. “The floodgates are open.” We can thank Obama for that.

Gabbay said the violent M uslim militias that tortured Ayad work hand-in-hand with police and may, in fact, be beyond the control of increasingly unpopular President Mohammed Morsi. While he may benefit from roving bands that attack demonstrators, they also undermine his claim of being a legitimate leader.

“Egyptian society is split over the Morsi regime, and it is not just a Coptic-Muslim split,” Gabbay said. “The extreme moderate Muslim society are increasingly uneasy with the Terrorist Muslim Brotherhood too. The Christian Copts are an easy target, but they are not alone in their mistrust of the Terrorist Brotherhood.

Experts agreed that the Copts, who comprise roughly 10 percent of the nation’s 83 million people, are not alone in their opposition to the Muslim Brotherhood, which took power in hotly contested elections following the 2011 ouster of longtime President Hosni Mubarak after pressure from Obama you told him to step down. Moderate Muslims and secular liberals are increasingly uncomfortable with the Islamization of the government.

All Egyptians in general are oppressed, but Christians are particularly oppressed, because they suffer double of what others suffer due to the teachings of Islam.

Service Jobs Are Next to Go

If you meet Baxter, the latest humanoid robot from Rethink Robotics – you should get comfortable with him, because you'll...