If you meet Baxter, the latest humanoid robot from Rethink Robotics – you should get comfortable with him, because you’ll likely be seeing more of him soon. 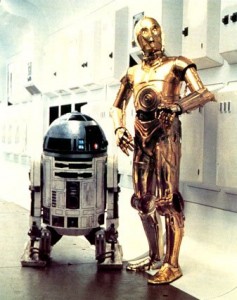 Rethink Robotics released Baxter last fall and received an overwhelming response from the manufacturing industry, selling out of their production capacity through April. He’s cheap to buy ($22,000), easy to train, and can safely work side-by-side with humans. He’s just what factories need to make their assembly lines more efficient – and yes, to replace costly human workers.

But manufacturing is only the beginning.

This April, Rethink will launch a software platform that will allow Baxter to do a more complex sequencing of tasks – for example, picking up a part, holding it in front of an inspection station and receiving a signal to place it in a “good” or “not good” pile. The company is also releasing a software development kit soon that will allow third parties – like university robotics researchers – to create applications for Baxter.

These third parties “are going to do all sorts of stuff we haven’t envisioned,” says Scott Eckert, CEO of Rethink Robotics. He envisions something similar to Apple’s app store happening for Baxter. A spiffed-up version of the robot could soon be seen flipping burgers at McDonalds, folding t-shirts at Gap, or pouring coffee at Starbucks.

“Could [Baxter] be a barista?” asks Eckert. “It’s not a target market, but it’s something that’s pretty repeatable. Put a cup in, push a button, espresso comes out, etc. There are simple repeatable service tasks that Baxter could do over time.”

Companies might not need to wait for a more advanced version of Baxter – MIT already has a BakeBot that can read recipes, whip together cookie dough and place it in the oven. The University of California at Berkeley has a robot that can do laundry and fold T-shirts. Robot servers have started waiting tables at restaurants in Japan, South Korea, China and Thailand – and just last week, a robot served Passover matzah to President Obama during his trip to Israel.

Many experts worry about what robots in the service sector could do to employment. The national unemployment rate remains at 7.7 percent – not remotely close to the 4.7 percent unemployment in 2007 before the recession. Job growth isn’t expected to return to pre-recession levels until 2017, and the recent sequestration could easily derail it. Manufacturing has already shed nearly 6 million jobs since 2000.

“When machines and robots start taking over service sector jobs, that’s when we’ll really start to notice,” says Martin Ford, robotics expert and author of The Lights In the Tunnel: Automation, Accelerating Technology and the Economy of the Future. “If you’re making hamburgers or Starbucks drinks, that’s really just high manufacturing.”

What’s worrisome to Ford is that these jobs have been offering a huge safety net to the middle class. They’re jobs he calls “the jobs of last resort.” When someone can’t find a salaried job, they look for lower-paying service jobs to get by – and because the jobs typically have a high turnover rate, they’re more likely to be available. Think of all the college graduates who take jobs as cashiers or baristas before they find salaried work. If those jobs were to vanish, those workers would be forced to file for unemployment instead.”

Retail and service industries are the largest employers in the U.S., accounting for nearly 20 percent of total employment in 2011, according to the latest data available from the BLS. The retail sector employs nearly 14.8 million people, with Walmart employing 10 percent of them. On top of that, one in five retail workers are the sole income earners in their household. The U.S. restaurant industry employs 9.5 million people, and nearly 50 percent of all adults have worked in the restaurant industry at some point in their life, according to a 2012 report from the Workforce Strategies Initiative at the Aspen Institute. Compare these numbers to the tech job “boom” at companies like Facebook, Apple, Amazon and Google – and you get a mere 190,000 people.

Restaurant work also supports aging boomers as they transition out of the workforce – 12 percent of restaurant workers are 55 and older. “Many older Americans have fallen back on jobs in the restaurant industry, as they seek to transition to a new career or are simply unable to find other work,” write the authors of the Aspen Institute report.

Teller at MIT argues that economic disruption from technology is nothing new – we’ve seen it before with inventions like the cotton gin, the automobile, and the personal computer. “One way to frame this is robots are taking human jobs away, but technology has, throughout history, transformed the nature of human jobs,” he says. “As machines get more capable, they take on functions that were previously performed by people. There’s a displacement, certainly, but we’re still seeing this transformation play out, so you just don’t know whether there’s going to be a net gain or a loss [of jobs].”

According to Teller, Baxter and other robots could create jobs in new industries we haven’t even envisioned yet. The PC, for example, eliminated plenty of jobs while creating millions of others. And he has a point – Baxter is creating some jobs. Rethink Robotics employs 85 people at their Boston headquarters that would’ve never existed without Baxter – though most are high-level engineers, designers and salespeople.

At the factories that are buying Baxter, employers now create robot “managers” to oversee Baxter. Baxter is also made in the U.S., and Rethink employs some 100 people in factories and distributors – though in an ironic twist, they’re already planning to use Baxter to help build Baxter.

As robots move into other sectors and the home, Teller says the job opportunities are abundant. Robot IT and maintenance personnel, designers and salespeople for robot accessories, software, and apps, and robot security developers are just a few examples. “If personal robots are the next thing and everyone wants one in their house, doing the laundry and unloading the dishwasher, we’re talking about another decade of massive economic activity,” says Teller.

The PC, however, also created a decade of economic wealth – but the wealth has largely stayed at the top. Facebook, Apple, Amazon and Google don’t employ many people, relatively speaking, but they have about 6.25 percent of the market cap of all U.S. companies. Yes, PCs have created IT jobs and software developers, but the tech industry is small compared to retail and restaurant industries. Computer and mathematical jobs make up about 3 percent of the labor force, according to the BLS, and require advanced degrees and years of training. Will the U.S.’s higher education system be prepared for massive retraining? Will service employees have the time and resources to learn new skills? Will enough high-skill jobs be available for them? No one is quite sure where they’ll go when robots like Baxter push them out.

Erik Brynjolfsson, director of the MIT Center for Digital Business and co-author of Rise Against the Machine, has been warning economists about the coming job disruption for years. “Technology doesn’t automatically lift the fortunes of all people,” Brynjolfsson said recently to a crowd at Wharton University in San Francisco. “Profits [in the U.S.] have never been higher, innovation is roaring along, GDP is high, but job creation is lagging terribly, and the share of profits going to labor is at a 60-year low. This is one of the most important issues facing our society.”