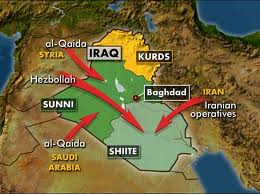 AFP reported that Kerry warned Prime Minister Nuri al-Maliki that Washington was “watching what Iraq is doing,” the highest-level criticism yet of Baghdad for not inspecting flights which Tehran insists are carrying humanitarian supplies.

The one-day visit, the first to Iraq by a U.S. secretary of state since 2009, also focused on American concerns that months of protests in the country’s Sunni-majority provinces will give terrorists groups including Al-Qaeda room to maneuver.

It comes just days after the 10th anniversary of the U.S.-led invasion of Iraq that ousted Saddam Hussein amid concerns of flagging American influence barely a year after U.S. forces withdrew.

“I made very clear to the prime minister that the overflights from Iran are in fact helping to sustain President (Bashar) al-Assad and his regime,” Kerry was quoted by AFP as having told reporters in Baghdad after meeting Maliki.

He added that he told Maliki that American politicians were “watching what Iraq is doing” and noted that anything that helped Assad was “problematic.”

“So my hope is we will be able to make some progress on this,” he said.

For months, Washington has accused Baghdad of turning a blind eye as Tehran sends military equipment through Iraqi airspace, and has called on authorities to make random, unannounced inspections.

Although American officials have often expressed frustration with Iraq’s lack of inspections, Kerry is the most senior official yet to criticize Baghdad, noted AFP.

Iraq announced two inspections of aircraft, both in October 2012, but the New York Times reported in December that Iran appears to have been tipped off by Iraqi officials as to when inspections would be conducted, thus helping Tehran avoid detection.

Iran has remained a steadfast ally of Assad’s regime despite the conflict in his country which, according to the United Nations, has killed more than 70,000 people since it erupted in March 2011.

The visit to Iraq is Kerry’s latest on a Middle East tour, the first part conducted alongside U.S. President Barack Obama, that has also taken him to Israel, the Palestinian Authority and Jordan.

Hugo Chavez may be gone, but the Jews of Venezuela are not resting any easier. Over the weekend, anti-Semitic graffiti...