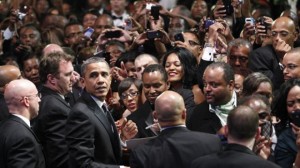 WB Construction & Sons Inc. is a 10-employee, minority-owned firm that received $7.5 million in five stimulus contracts from the federal government, but it did not do close to that much work.

Every one of the stimulus contracts it received followed a pattern: Win a contract roped off for minority-owned businesses, where only one other company put in a bid. Then pay Apeck Construction Inc., a non-minority business, to do the vast majority of the work, while keeping a 10 percent cut for itself.

One might expect that nearly $8 million in construction projects would create jobs at WB. Instead, in keeping with its role seemingly as a pass-through that fills out paperwork rather than building, WB simply hired a new “office clerk.”

While there’s a rule to prevent the pass-though contracting practice, which is commonly used on projects reserved for small businesses, it is not rigorously enforced, leaving open to abuse federal programs designed to grow jobs and bolster both small businesses and businesses in minority communities.

National Black Chamber of Commerce CEO Harry Alfred said the program has a great intent and has played an instrumental role in “the majority of successful black businesses in the U.S.” But he said it is being abused.

An analysis by The Washington Times of contracting data found that large numbers of contracts awarded under President Obama’s $785 billion stimulus package were reserved for small businesses and minority-owned firms that merely took cuts as middlemen. Seventeen percent of contracts where bidding was restricted to minority-owned firms subcontracted the majority of the work to someone else, compared with 2 percent of companies that won small-business contracts and 6 percent that won bids open to anyone, The Times analysis found.

Despite the disparity, several federal agencies — including Veterans Affairs and the U.S. Forest Service — were not alarmed by the practice or its impact on the goal of such programs.

“Subcontracting work has nothing to do with eligibility,” Veterans Affairs spokeswoman Jo Schuda said when asked about pass-through contracts.

But even some of the participants question the practice, its potential strain on tax dollars and lack of oversight. They say federal agencies are just trying to meet quotas.Provideo Management Inc., a minority-owned business with two employees, received a $3.48 million contract to buy Cisco Systems Inc. hardware for the National Institute of Standards and Technology. Provideo paid $3.45 million to World Wide Technology Inc., a black-owned Missouri business with annual revenues of $2.1 billion, to buy the materials, in turn, from Cisco. How did Provideo earn its share? According to stimulus disclosures, a significant portion of its work consisted of filling out those very forms.

Thirty-two thousand dollars is a good cut for a middleman who merely called another middleman, Provideo head Guillermo Calvo acknowledged. “The nature of the contract itself is hardware reseller. There are no services, per se. At the same time, how much work did Worldwide do?”

What was the purpose of routing a purchase order for hardware from Cisco through two intermediaries, paying for the corresponding markup as well as for contracting officers to oversee a bidding process?

“Frankly, I’ve asked those questions myself as a taxpayer and I don’t know the answer,” other than helping agencies meet their legislatively mandated quotas, Mr. Calvo said. He said he was merely competing in a system under rules defined by the federal government and uses his status as a small business more than his status as a Hispanic.

Federal agencies are required to give 23 percent of their business to disadvantaged contractors, including small businesses and minority- and veteran-owned firms. Agencies decide when to limit the pool of applicants who can bid on a particular contract, known as “set-asides,” to members of one of those groups.

The Times joined detailed reports filed by stimulus recipients with their closest matches from the federal government’s main contracting database, which has more information about disadvantaged statuses and set-asides but less information about subcontracting, proving a never-before-seen window into the process.

It does not take long for patterns to emerge in contracting data between pairs of companies — one equipped to get contracts based on its disadvantaged status and another to perform the work.

Fidelis Design & Construction LLC is owned by a service-disabled veteran who also is a minority. It received $13.5 million in six stimulus contracts from Veterans Affairs, all reserved for disabled veterans. But each time, it subcontracted virtually all the work to Pride Enterprises, a black-owned firm that would not have been eligible to bid on the contracts directly. Fidelis described its role as “supervisory” in stimulus disclosures.

In all, Fidelis kept $1.4 million, or 11 percent, with the remainder going to Pride.

Pride Enterprises said “there’s no relationship — no relationship at all” between the two companies. But Richard Bennett of Fidelis acknowledged that at the time of the contracts, Pride’s owner was a partner in Fidelis — meaning a non-veteran was repeatedly winning contracts reserved for veterans and routing them to his construction company.

“We were using Pride Enterprises’ resources until the government said that was unacceptable, so I bought them out,” Mr. Bennett said. “He hasn’t been a partner for more than a year — for two years now.”