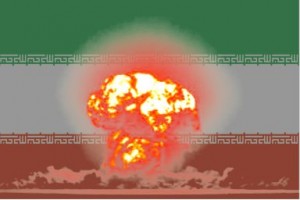 “Seeking to ward off international pressure, Iranian nuclear officials have kept the country’s stockpile of uranium enriched to 20% purity below 250 kilograms (550 pounds). Iran would need such an amount—if processed further into weapons-grade fuel—to produce one atomic bomb, experts believe.” He additionally quoted Israel’s US Ambassador Michael Oren as telling WSJ, ’There is a good point to be made that Iran has accepted 250 kilograms as the red line, but they are doing this very cleverly.”

The country’s moves would “enable Iran to cross the red line clandestinely in a matter of weeks,” he told WSJ.

His first article was published on March 2, 2013. In his second, more reader-friendly article entitled, “Iran Can Bake an Atom Bomb Cake (Easier version),” on March 8, 2013, Langfan stated: “Conclusion: Hence working backwards, if the Iranians were able to stockpile 240 kg of 20% UF6, then Iran could quickly enrich that stockpile and arm one nuclear bomb in less than a month. Therefore, 240 kg of 20% U235 UF6 gas is Bibi’s Red-Line.”

When asked about the 10 kilogram discrepancy, Langfan commented, “Today’s WSJ article was my birthday gift.  And, what’s 10 kilograms between friends, anyway?”

Young Dutch immigrant teenagers expressed admiration for Adolf Hitler and his efforts to murder Jews in a video aired last...