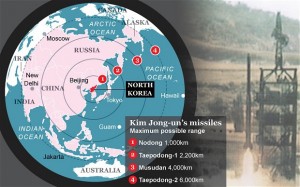 South Korean Defense Minister Kim Kwan-jin said the missiles are not capable of hitting the U.S. mainland. Some reports had claimed the missiles were long-range KN-08s which could hit America’s west coast.

Mid-range missiles could threaten the U.S. territory of Guam.

Kim said he did not know why the missiles were moved, but speculated that it “could be for testing or drills.”

United Nations chief Ban Ki-Moon warned earlier this week that the Korean crisis could spin out of control. “Nuclear threats are not a game,” he warned.

Court of Appeals to Lawyers: Truth Matters – And We Mean It

Walter Choroszewski Stock Connection Worldwide/Newscom The U.S. Court of Appeals for the Seventh Circuit recently sent a strong message to...