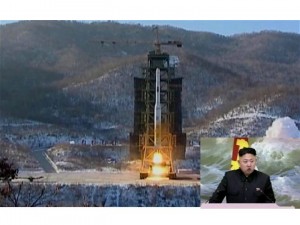 ROGUE state North Korea today sparked fears that it could trigger a nuclear strike as early as next WEDNESDAY.

Crackpot Kim Jong-un’s regime today issued a chilling threat to British diplomats warning them to get out of Pyongyang.

Alarmingly the North Korean government said it would not be able to guarantee the safety of embassies from April 10.

Russian diplomats have also been advised to evacuate.

Today the Foreign Office added that it is “considering next steps” after the threat.

It is still unclear why next Wednesday has been set as a deadline – but it is sure to spark fears despot Kim Jong-un will launch an attack after that date.

This week South Korean workers employed in factories in the North were also told to leave by April 10.

The dramatic development came as North Korea moved a second missile to its east coast in a further threat to Japan, South Korea and US Pacific bases.

The rogue state has already transported a Musudan missile with a range of 1,800 miles (3,000km) to the same area.

Today, a Foreign Office spokesman reportedly said: “We can confirm that the British Embassy in Pyongyang received a communication from the North Korean government this morning.

“It said that the North Korean government would be unable to guarantee the safety of embassies and international organisations in the country in the event of conflict from April 10.”

The Foreign Office today confirmed that it has “no immediate plans to withdraw our embassy” in Pyongyang and said it condemned the “provocation” by the North Korean government.

A spokesman went on: “The Democratic People’s Republic of Korea has responsibilities under the Vienna convention to protect diplomatic missions, and we believe they have taken this step as part of their continuing rhetoric that the US poses a threat to them.”

The Foreign office declined to disclose how many staff are working in Pyongyang, but said no decision had yet been taken on whether to pull out. “We are considering next steps,” the spokesman added.

Two rockets have been loaded onto mobile launchers and hidden in special underground facilities on North Korea’s east coast , according to a government official.

The official added: “The North is apparently intent on firing the missiles without prior warning.”

The range of the second missile is unknown though it is believed to be an inter-continental ballistic KN-08 missile, which is untested by the regime.

It came as a powerful 6.2 magnitude earthquake struck near the North Korean border in far-eastern Russia.

The epicenter of the quake, which struck at 1pm (GMT) was south-west of Vladivostok, around five miles from Russian border town Zarubino.

Meanwhile, the Pentagon has pledged to tone down pronouncements about its military build-up after the crisis on the Korean peninsula threatens to spiral out of control.

In recent days, the US has flown two B-2 stealth bombers over South Korean and announced an expansion of missile defence systems in Alaska and Guam.

But rather than encouraging North Korea to back down, the US’s military movements have prompted even greater threats and belligerent rhetoric from Pyongyang.

On US official said: “Our actions thus far have had their intended effect: they’ve shown our deterrence capability and our willingness to defend South Korea.

“We always make adjustment and if going quiet for a short period of time gives the North Koreans space to dial back their rhetoric, fine.”

However, Washington still plans to forge ahead with joint military exercises with Seoul – including an amphibious assault drill – branded by the North as “rehearsal for invasion”.

The exercises codenamed Foal Eagle began on March 1 and will end on April 30.

Some US analysts expressed alarm over the intensity of the North’s threats. Centre for Strategic Studies senior adviser Victor Cha said: “The rhetoric is off the charts.”

But despite the North’s threats to attack the US, David Cameron was today slammed for making the extraordinary claim yesterday that North Korea could strike Britain.

Experts disputed his comments, saying North Korea does not have missiles that can reach Europe nor can mount nuclear warheads on them, sparking comparisons with the “sexed-up” dossier which Tony Blair used to justify the invasion of Iraq ten years ago.

International Institute for Strategic Studies director Mark Fitzpatrick said: “North Korea does not have any missile capabilities that could hit Britain and it is difficult to envision circumstances when North Korea ever would want to attack the UK even if they could.”

The Philippines has said it is ready to help the US amid threatened attacks from North Korea, the country’s foreign minister said, hinting at the possibility of more US military bases there.

US forces have previously used military bases and civilian airports in the Philippines to repair and refuel aircraft and warships deployed in wars in Iraq and Afghanistan.

Hunt for the word “homophobia” – purportedly a fear of homosexuality – and Merriam-Webster, the ADL, Wikipedia, Oxford Dictionary, The...