Pueblo County Republicans are giving gun control advocates an opportunity to show their neighbors their stance on the controversial issue with newly designed yard signs.

The signs, which designate a property as a “Gun Free Zone,” are available at the Republican Party headquarters, 108 Lincoln St. 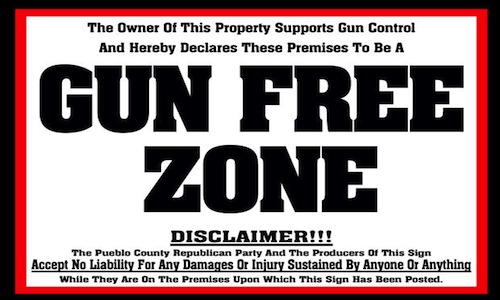 Republican Party member George Rivera said although the party is opposed to the recent gun control legislation, members know there are others who are not of the same opinion.

“Therefore in the interest of fairness and in order to do our part to help gun control advocates promote their principles, the Pueblo County Republican Party has on hand a limited supply of ‘Gun Free Zone’ yard signs,” Rivera said.

The cost of the signs are $10 each, however, Rivera said legislators who voted in favor of the gun control legislation can receive a sign for free.

“We hope they will want to show they stand by their beliefs and that they are not just a lot of talk and no action,” Rivera said.

“Specifically, we invite Senator (Angela) Giron, DPueblo, to contact us for a sign. We’d be happy to take and put it in her yard.”

As individuals walk into the Republican headquarters to get a “Gun Free Zone” sign, Rivera said they will pass a placard stating, “This is not a gun free zone.”

He said that sign has drawn so much interest, Republicans plan to make more of them to sell to local gun supporters.

“For people who support the Second Amendment right, we want to give them the opportunity to advertise their property as not being a gun free zone.”

In Case You Missed It:  Lancet letter says stigmatizing unvaccinated in society "not justified"
Posted in Freedoms and tagged Constitution, Freedom, Liberalism.

Twelve members of the Hizbullah terrorist group have been killed in an ambush near Damascus, Al Arabiya reported Tuesday, quoting...