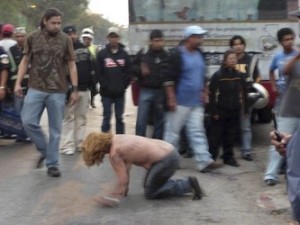 A disturbing video uploaded to YouTube on Tuesday shows what appears to be an angry Muslim crowd in Upper Egypt beating and stripping two Coptic Christian women in broad daylight in a rural area.

The video opens with a crowd shouting “Nasara” (Christians) before the two women are set upon by this crowd. The video shows many passers-by having no visible reaction to the events. The accents of the attackers seem to support claims that the attack happened in Upper Egypt.

After the video was circulated, some said the incident occurred in Farshout in Qena Governorate in 2009, following accusations that a Coptic Christian, Girgis Baroumi Girgis, had raped a Muslim girl. The accusation sparked widespread sectarian clashes, with Muslims burning and destroyed dozens of shops belonging to Copts in Farshout’s al-Koum al-Ahmar village.

However, Amir Saraf, a journalist from Qena, denied that the attack in the video happened in Farshout.

Speaking to Egypt Independent, Saraf said he was pretty sure that the attack didn’t occur in Farshout because he was covering the aftermath of the rape and claimed “stuff like that (the mob stripping women) didn’t happen.”

They said the women were set upon after attending the Dairout Diocese. The police eventually rescued them.

They contend that a video was circulated about a relationship between a Coptic man and a Muslim woman, which sparked violence. The Coptic man’s father was killed, however, the defendants were acquitted, they claim.

The video was originally uploaded by someone named Mina Mouris, whose Youtube account name switched to James Knowing. The account has been removed now and the video was removed by the original user later on Tuesday but many have downloaded it, and a mirror copy was uploaded on an account owned by someone who often expresses Islamophobic sentiments.

The description of the video says that “This clip filmed by proud Muslims, raping a Coptic Christian girl while her mother tries to protect her, in broad daylight in the streets near a large market in Upper Egypt. The chants of ‘Allah Akbar’ are all too common when seeing this barbaric behavior.”

Heritage Analysts: What We Saw in Venezuela

LEO RAMIREZ/AFP/Getty Images/Newscom The situation encountered by Heritage analysts on the ground in Venezuela last week was of a country...