Facebook: “We removed the following content you posted or were the admin of because it violates Facebook’s Statement of Rights and Responsibilities.”

Facebook’s Statement of Rights and Responsibilities stipulates that “you will not post content that is hate speech” or “incites violence.”

While Facebook is preventing PMW’s exposure of the PA’s hate speech, Facebook’s policy has not been applied to the explicit terror promotion and terror glorification by Fatah on Facebook, which PMW has documented, all of which were posted by Fatah’s Facebook page administrator: 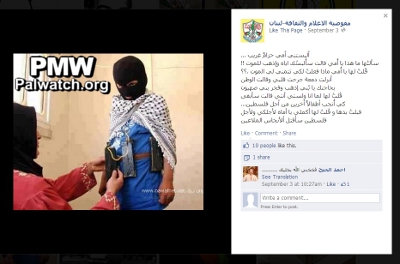 Fatah in Lebanon encouraged violence and terrorism by posting a picture of a mother dressing her young son with a suicide belt. The picture was accompanied by an imaginary conversation between the son who is being sent to his death and the mother encouraging it. “Why me and not you?” the child innocently asks his mother, who answers that she will continue to have more children “for the sake of Palestine.” This terror promotion and glorification still appears on Fatah Lebanon’s Facebook page. 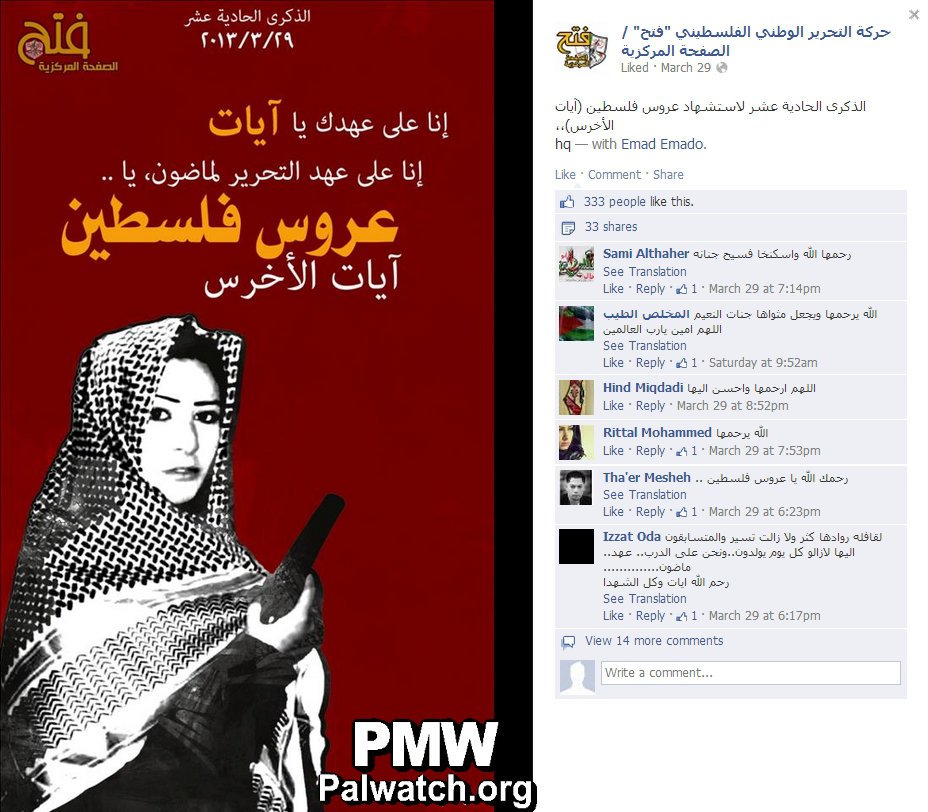 Fatah glorified two suicide terrorists who killed 6 Israelis, referring to them as “the Bride of Palestine” and “our hero” respectively. These two suicide bombers are still honored on Fatah’s Facebook page.

Fatah paid tribute to suicide bomber Wafa Idris who killed 1 and injured over a hundred Israelis during her attack in Jerusalem in January 2002. Part of the text about the terrorist read:

“The hero whose name the Zionists will remember well and so will Palestinians; the hero who sacrificed herself and her body for Palestine and became a symbol of the struggle and of Palestinian loyalty through one of the most honorable Martyrdom-seeking operations.”

Fatah posted a picture of terrorist Dalal Mughrabi and a poem honoring her. Mughrabi was responsible for the most lethal terror attack in Israel’s history when she led a group of terrorists who hijacked a bus and killed 12 children and 25 adults. Part of the poem read:

“This is Dalal, my eternal love… Dalal is my mysterious young woman, my revolutionary Jihadi inspiration. I loved her but knew only her name, Dalal Mughrabi.”

Fatah glorified violence and terror as acts of heroism, and depicted a world without Israel. It posted pictures of automatic rifles and slogans venerating arms. In some pictures, young children were carrying rifles. These posts still appear on this Fatah Facebook page.

Why Are Only Jews Referred to as Terrorists in the Media?

April 10, 2013 14:17 by Simon Plosker HonestReporting has long campaigned for the international media to call terrorism exactly what...