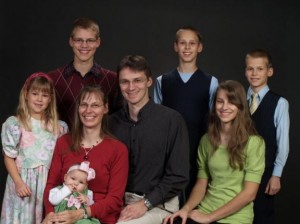 Barack Obama has done everything possible, legal and illegal, to allow millions of illegal immigrants to remain in the US.  He has given directives to the Department of Homeland Security and the US Immigration and Customs Enforcement to not deport illegals unless they have a prior criminal record.  Otherwise, he has welcomed them with open arms and has offered them more than he’s given to American citizens.

But Obama is not the warm welcome wagon president he seems to be.  At the same time he’s allowing millions to stay, he is also working hard to deport one specific family.  Why?  Because they are White Christians who only want to homeschool their six children, and they are conservatives.

Uwe and Hannelore Romeike sought asylum in the United States because their native Germany has outlawed homeschooling.  When their kids did attend public school, they were harassed and bullied because they were Christians and the schools did nothing to prevent it.  At one point, the German authorities took the children from the parents and fined them thousands of euros.

In 2010, they applied for political asylum in America, the land of the free.  A US immigration judge ruled that they were in fact facing persecution from the German government and granted them political asylum in the US.  The family moved and settled in Tennessee.

However, the Obama administration is doing everything in their power to rescind the political asylum status and force the family to return to Germany.  The White House and Justice Department are so adamant about deporting a Christian family that the case is about to be heard before the Sixth US Circuit Court of Appeals.

The family is being represented by the Home School Legal Defense Association.  Founder of HSLDA, Michael Farris commented about the case saying:

“The Obama administration is basically saying there is no right to home school anywhere.  It’s an utter repudiation of parental liberty and religious liberty.”

“They are trying to send a family back to Germany where they would certainly lose custody of their children.  Our government is siding with Germany.”

“Eleven million people are going to be allowed to stay freely – but this one family is going to be shipped back to Germany to be persecuted.  It just doesn’t make any sense.”

“If we go back to Germany we know that we would be prosecuted and it is very likely the Social Services authorities would take our children from us.”

“The German schools teach against our Christian values.”

The Home School Legal Defense Association is doing everything in their power to help the Romeike family remain in the United States because of the certain persecution they face back in Germany.  One of their tools is a White House petition where they currently have just over 100,000 signatures.  Their goal is to get over 350,000 signatures before the 18th of April.  You can help keep this Christian family here in the US by signing the petition and praying for divine intervention.

They say you judge a person by their actions, not their words.  If that is true, then there can be no doubt that Barack Hussein Obama is a Muslim and defends the Muslim faith against all others.  That’s why he is continuing to persecute the Romeike family and send them back to Germany where they will be sorely punished for being Christians and wanting to raise their children with a biblical education.  If they were Muslim and being persecuted for the sake of Allah, they would not be facing deportation as Obama would make a national spectacle of how he would be saving and protecting the family.

This appears to be the only logical reason that Obama and his human rights loving administration would be trying so hard to deport this family.

In Case You Missed It:  Existential Threat: There Were 93,331 Drug Overdose Deaths in the US in 2020 and ZERO Deaths from Global Warming in the US in 2020
Posted in Tyranny and tagged Immigration, Obama, Racism.

A North Korean missile launcher has moved into the firing position with rockets facing skyward, Kyodo reports, citing a Japan...