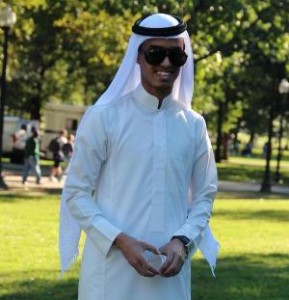 Evidently, Obama will not call al-Qaeda ‘terrorists’ what they are which means that we do not want to label our enemies with a tag that will identify them as our enemies. This gives the terrorists Amnesty and free pass to America through the open borders as the 11 million illegal invaders can get the free Obama check and free Obama phone soon thanks to the 8 gangsters of the Senate.

A Saudi national is under watch in a Boston hospital, under guard surrounded by AK-47’s. As the liberal media is saying he is not a suspect, what they are not telling you is that he is a person of interest and is apartment was searched, investigators removed many bags from his apartment. Sources said that, after the Saudi man was grabbed by police, he smelled of gunpowder and declared, “I thought there would be a second bomb”, then went to ask ‘did anyone die’?

His name according to FoxNews.com the person of interest is Abdul Rahman Ali Alharbi, a 20-year-old Saudi national. His Facebook page identifies him as a current or former student at the New England School of English. He is believed to have entered the country on a student visa.

Investigators also have video footage of a terrorist planting the bombs in trash cans. What we do know is investigators have seen the footage, and still holding Alharbi even now. Pressure-cooker explosives were used yesterday, and have been used in international terrorism. This type of terrorism has been recommended for lone-wolf operatives by Al-Qaida’s branch in Yemen

As the left and Matthews and company are foaming at the mouth hoping this was done by a conservative right winger. So far the evidence is pointing toward Islamic extremist.

Shocking as it seems, it doesn’t look like it was MSNBC that would be first to speculate, or make reference to, “right-wing extremists.” CNN beat them to the punch.

As of yet, there is no evidence to suggest any sort of involvement of any kind of “right-wing extremist;” for that matter.

Remember back to the day, and subsequent days, following the shooting of Gabby Giffords? Remember how quickly it was speculated that her shooter was a member of the “right-wing?” Remember how quickly Sarah Palin was condemned for her campaign map that featured crosshairs over certain districts? Within moments, those on the Left had pinned blame on “right-wing extremists;” calling for a ban on heated rhetoric on the part of Conservatives, while completely ignoring rhetoric from the Left.

Even if one percent of the 11 million faceless illegal invaders are criminals or terrorists from the Middle east, this means more than 110,000 terrorists will be granted Amnesty and free food stamps by Obama so that they can vote for liberals in 2014 while we do not have 110,000 police officers to protect that American people from the terrorists.

Obama wish to disarm the good law abiding Americans which is good help for the terrorists to be more successful in their crimes against the American people. Obama wish to keep the borders open and bring 40 million more illegal invader parasites that will create new bloc of liberal Democrat votes for his socialistic revolution Venezuela style that will destroy the GOP and create welfare country for the poor and terrorists of the world.

You can have an al Quieda cell, with pictures of themselves making and placing the bombs trying to turn themselves in or calling in their confessions and the liberals will try to ignore it. Obama and his liberal minions clueless boobs are still hoping and praying for a Tim McGee type.

Now here is the clicker, the feds have already gathered every shred of evidence that could prove the terrorist guilty. Expect instructions from the Muslim boss Obama for all evidence to disappear.

Obama will do everything in his power to cover this act of terrorism by Islamic jihadists. Never expect to know the truth. Sure invite some more over too! After all they are a peaceful religion!

Time for American’s to realize that our greatest enemy are Muslims. It’s that simple and guess who is the leader of our country? A #$%$ Muslim. If you think these people are not radical or completely insane, just visit the Middle East sometime. Yet, we bend the #$%$ over backwards for all of their dumb #$%$ beliefs and if we don’t agree with them, they want to KILL us! Real Rational there folks. Wake the #$%$ UP!!!

Obama said we need gun control due to shootings in various locations in the USA, what about terrorism control? We have numerous attempts and now another successful bombing in Boston, is time to limit immigration of Muslims? Using Obama’s previous analogy, the answer should be yes!

Our country lacks a moral leader and president. He leaves out terrorism after the attack, only to correct himself today.

Amidst ongoing media reports of two explosions in the American city of Boston, Massachusetts, near the finish line of the...