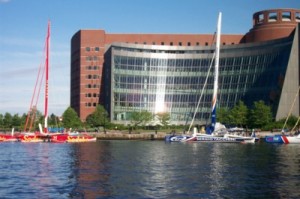 A reporter for the Boston Globe Milton Valencia just announced on Twitter that the Boston courthouse is being evacuated, code red. US Marshalls yelling “We need you to pull back, for your safety”. A Caravans pulled up in front of the Sources: Moakley courthouse. They dropped someone off, they went back into back of courthouse.

Either there was a threat to the courthouse or the suspect from the Bombing has been brought to that location. There was an escorted white van taken into the courthouse garage just 5 minutes ago. The Place is packed with media inside and out, some on different floors anticipating a possible appearance of the bombing suspect.

The city’s federal courthouse, where a large contingent of media had gathered in anticipation of an appearance by the suspect, has been confirmed evacuated, hundreds of people are outside. A large number of law enforcement vehicles just pulled up. People are being pushed a block back from the courthouse. US Coast Guard and Boston police boats are also stationed in the waters outside the courthouse.

A Globe source with knowledge of the case said earlier in the day that an image had been captured of a suspect carrying, and perhaps dropping, a black bag at the second bombing scene on Boylston Street, outside of the Forum restaurant.

People outside the courthouse were told a bomb threat made to the Moakley courthouse.

That official said authorities may publicize their findings as early as this afternoon. A news conference was slated for 4 p.m.

In Case You Missed It:  Mexican President Demands Clarity or Apology from Obama Admins “Fast and Furious” Gun Running Program
Posted in Terrorism and tagged Terrorism.

Authorities say they are searching for a darker skinned or black male with a black backpack and black sweatshirt, possibly...