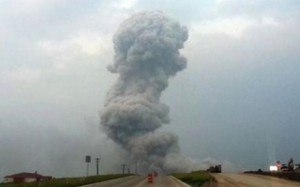 (Reuters) – Authorities in Texas reported a large explosion on Wednesday at a fertilizer plant in the town of West, near Waco, and local media said that there were a number of injuries reported.

The blast, reported shortly before 8 p.m. CDT (0100 GMT on Thursday), was confirmed to Reuters by Waco police dispatch operators, who could not immediately confirm reports of damage or injuries. It is unknown at this time if terrorism was involved.

The Waco Tribune newspaper, in an online account, quoted an emergency dispatcher calling for multiple ambulances and saying, “we have a lot of injured here.”

The Tribune said several buildings were reported to be on fire, including a middle school in West, a town of some 2,700 people about 80 miles south of Dallas and 20 miles north of Waco. Everything within a 4 block radius was “flattened” in the town of West. Many, many structure fires including apartments and a nursing home. The roads leading into and out of the town are limited, and ambulances are backed up going into the town. There are not enough helicopters to evacuate all the injured. The rest of the town is being evacuated right now because there is another huge tank that is in danger of exploding. The blast was felt and heard as far as 65 miles away. Many people in the region thought there had been an earthquake. The cloud from the explosion looked like a nuclear detonation. Reports are that there are dozens dead including police and fire personnel, this is a really bad situation.

The majority of the population in West is of Czech descent; West bills itself as “the kolache capital of Texas”.

In Case You Missed It:  Elizabeth Warren Tries To Defend Biden By Blaming High Gas Prices On Greed Of Oil Companies (VIDEO)
Posted in Terrorism and tagged Texas, United Socialist States of America.