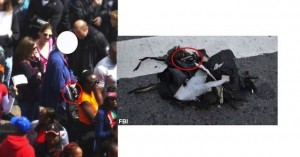 An official briefed on the Boston Marathon bombing investigation said today that authorities have an image of a suspect carrying, and perhaps dropping, a black bag at the second bombing scene on Boylston Street, outside of the Forum restaurant.

Investigators are “very close” in the investigation, said the official, who declined to be named.

That official said authorities may publicize their finding as early as this afternoon.

The same official also said a surveillance camera at Lord & Taylor, located directly across the street, has provided clear video of the area, though it was unclear whether the image of the suspect was taken from that camera.

Authorities planned to brief the media on the progress of the investigation at 5 p.m. today.

Police Commissioner Edward F. Davis said shortly before noon after leaving FBI headquarters that investigators were “working hard and there’s a lot going on,” but he had no comment on whether progress had been made in the case. No arrests were reported this morning.

Authorities had appealed to the public for video and photographs of the area near the bombing scene at the finish line of the marathon, noting that many people among the crowd were likely to have taken photos of the conclusion of the world-renowned event.

Two bombs exploded within seconds of each other at 2:50 p.m. Monday near the Boylston Street finish line, killing three people and injuring 176, many of whom suffered major trauma from flying shrapnel, including nails and ball bearings that authorities have said were stuffed into the explosive devices by their makers.

In Case You Missed It:  COVID-19 Crisis Is Giving New Power to Bureaucrats, Politicians

A massive investigation is underway, involving local, state, and federal law enforcement, and officials have promised to go to the “ends of the earth” to find the culprit or culprits.

Newscom On the eve of Secretary of State John Kerry’s testimony to Congress on securing American interests abroad, the release...