Jewish activist Pamela Geller has no plans to go away – or to be quiet in the wake of what she says is a media campaign to silence her. The media may refuse to acknowledge her message about the dangers of Muslim terror, ideology, and anti-Semitism, but she is not going to stop presenting it. 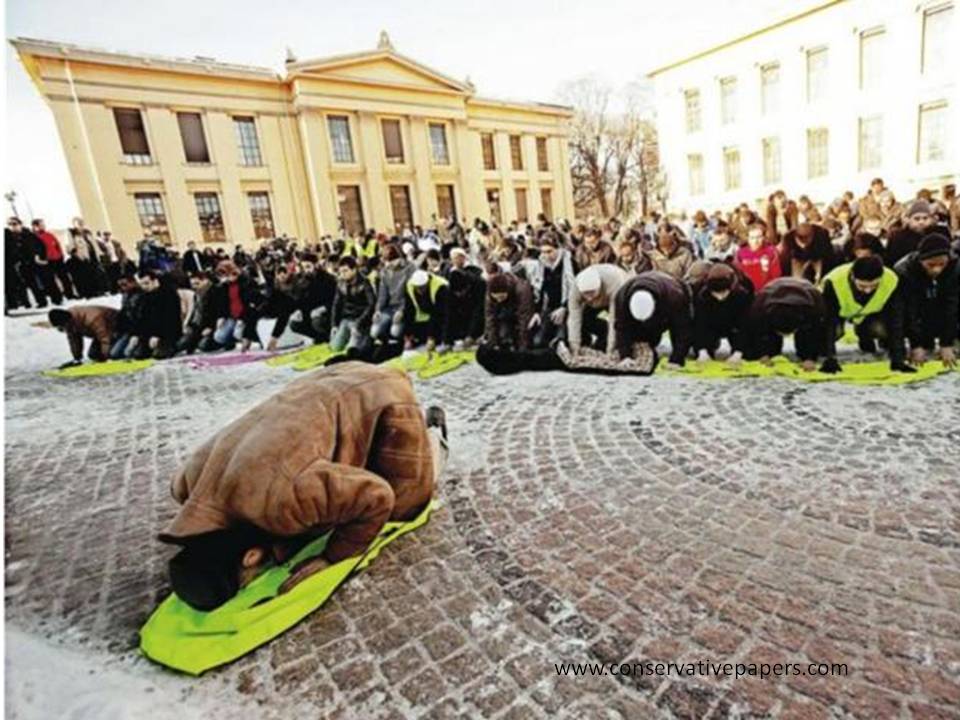 Muslim demonstrators gather at University Square in Oslo to protest against drawings of Muhammad, Calling for Norway’s 9/11

Geller is co-founder of the American Freedom Defense Initiative and has been at the forefront of championing causes that have to do with democracy, freedom, liberty and justice through her role as a leading blogger at “Atlas Shrugs”, a co-founder of “Stop the Islamization of America” and a prolific writer on the subject of the threat to the American value system that she feels is represented by insidious encroachment of Sharia law in the Western world.

Recently, Geller was invited to speak at one of the synagogues in Great Neck, but local Jewish leftist activists exerted heavy pressure on the synagogue, in order to prevent her from speaking.

Members of the local Jewish community told Arutz Sheva that the leftists threatened to take action against the synagogue if it allows Geller to speak there. The rabbi of the synagogue eventually surrendered and canceled the lecture, they said.

Local Chabad members, however, heard the story and, deciding that freedom of expression is a supreme value, allowed Geller to lecture at one of the local Chabad synagogues. The Chabad members were also threatened but did not give up. The community members said that even when well-respected donors told Chabad they would block financial aid if they let Geller speak, Chabad was not deterred and said it intended, despite the threats, to allow Geller to be heard.

Geller spoke to the Chabad audience last Sunday, and in an interview with Arutz Sheva‘s Yoni Kempinski before the event, she gave her account of what it was like to be the victim of a “smear campaign. I am not anti-Muslim, she said. Those who call her that are “part of a disinformation campaign, smear and defamation. Nobody talks about the work I do with muslim girls who want to lead a more western life, who are trying to get away from the Hijab. They have to set up a straw man, and portray it as if I hate Muslims.

“Frankly, it’s disingenuous,” she said “It’s a libel. I am a human rights activist dedicated to equal human rights for all. I don’t believe in special rights for special classes of people. Anyone saying that has not read my three books or hundreds of articles, or the 25,000 posts I wrote at Atlas Shrugged. I challenge anyone who makes these accusations to substantiate them. How do you accuse a person with no evidence?”

The media is a complicit player in this smear campaign, she said. “The media refuses to discuss Muslim attacks, even though since 9/11 there have been some 21,000 Muslim terror attacks around the world. When it comes to the Muslim Brotherhood and Islamist groups, like CAIR, who are unindicted co-conspirators in the largest Hamas funding case in history, there is full respect, and the media talks them as if they are legitimate. But immediately before my name comes the description ‘anti-Muslim.’”

“I oppose the Sharia, the most radical document in the world. What right thinking person wouldn’t?,” she added.

It’s unfortunate that the media, as well as American Jews, have their “heads in the ground” on the issue of Muslim anti-Semitism, she said. “In Europe it is a disaster. They are continuing Hitler’s work. It is ethnic cleansing. Is it as bad in America? Of course not. Do I see it coming? Of course.

“People are hard-wired for delusion. But if you look at college campuses, at the BDS movement, you can see where we are going – a Kristallnacht on a global scale,” she added. “There is silence when they hear the anti-Semitism in mosques. But for Geller they attack, because they know I won’t kill them.”

Geller was also very appreciative to Chabad for stepping in to help. “I am thrilled to be here at Chabad, an oasis of truth and beauty,” Geller said. “Chabad has been a touchstone for Muslim hatred around the world. What better place to give my message?”

Dr. Paul Brody, VP of the World Committee For The Land Of Israel, said Thursday: “Pamela Geller was victorious in her quest for the right to speak in Great Neck when she was heroically invited by Chabad Rabbi Yosef Geisinsky, after pressure was successfully exerted on another Great Neck synagogue to cancel her scheduled appearance. Geller is flanked by Jeff Wiesenfeld (at left) who initiated the idea for her to speak in Great Neck, and Dr. Paul Brody (holding flags), who was one of the key organizers of the event. Not lost on these activists is the famous painting behind them, of five of the great Rebbes of Chabad Lubavitch, standing side by side, who impacted a myriad events in Jewish History.”

Palestinian Authority Muslims in Jerusalem to be ‘Gifted’ Israeli Citizenship

Palestinian Authority Arabs living in the neighborhoods of Tzur Baher and Hado'ar living on the Israeli side of the security...