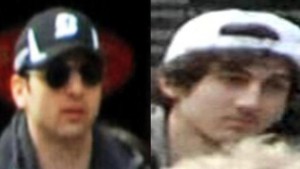 In the wake of the revelations about the violent nature of accused marathon bomber Tamerlan Tsarnaev, investigators in the Bostonsuburbs tell ABC News they are probing whether he may have been involved in an unsolved grisly triple homicide of a former roommate and two others. The murders took place around the tenth anniversary of the September 11 attacks.

“We are looking at a possible connection with the suspect in the marathon atrocity and this active and open homicide in Waltham,” Stephanie Guyotte, a spokeswoman for the Middlesex County District Attorney, confirmed to ABC News.

Tsarnaev, the alleged bombing mastermind who died in a fierce gun battle with police early Friday morning, had been training with one of the 2011 murder victims in an attempt to transition from boxing into a possible career in the brutal sport of mixed-martial arts.

The victims were found in a Waltham, Massachusetts apartment. They had their throat slashed, their heads nearly decapitated. Their mutilated bodies were left covered with marijuana.

It was a gruesome scene – but also perplexing to law enforcement. While drugs appeared to factor into the motive, the murderer left both the marijuana and thousands of dollars in cash behind in the Waltham apartment. While the investigation has been active for more than a year, authorities acknowledged they have had few leads.

Even before the bombing, police records show, there was an indication of a rage growing inside of Tsarnaev. Court documents obtained by ABC News show in July 2009 he was arrested for domestic violence after his then-girlfriend made a frantic 911 to report she was “being beat up by her boyfriend.” The police report, which was redacted to hide the girlfriend’s name, says that Tsarnaev admitted to responding officers that he slapped her. The case was later dismissed.

Tsarnaev had also been close to one of the murder victims, 25-year-old Brendan Mess, investigators told ABC. The two had been training together in a local gym –each helping the other with a missing element from their fighting arsenal. Tsarnaev, a golden-gloves heavy weight boxer, lacked martial arts training. And Mess, an experienced jiu jitsu competitor, lacked boxing experience.

The two sparred together at an Allston, MA gym called Wai Kru. The gym’s head trainer, John Allan, provided a statement to the Boston Globe via Facebook message saying that Tamerlan “came into the gym to spar from time to time.”

It was unclear if Tsarnaev knew the other men slain, Raphael Teken, 37, and Eric Weissman, 31.

A Waltham investigator who called the murders “the worst bloodbath I have ever seen in a long law enforcement career” said Tsarnaev has now proven he had the propensity for the type of violence that unfolded two years ago.

“There was no forced entry, it was clear that the victims had let the killer in. And their throats were slashed right out of an al Qaeda training video. The drugs and money on the bodies was very strange,” the investigator said.

One of Mess’ relatives yesterday told investigators they thought it was odd that Tsarnaev did not attend the funerals for his slain friend. The Mess relative also described animosity between the two friends “over Brendan’s lifestyle,” two law enforcement sources said. Because it is an open homicide investigation the sources were not authorized to speak on the record.

“Given how religious the older brother was, and we have heard information from the college about how the younger brother was ‘a pot head’ is there a chance that Tsarnaev was angry that Brendan was selling his brother marijuana? We don’t know,” said one of those sources. “But we are certainly interested in finding out.”

Tsarnaev and Mess had been socializing together in the months before the murder, according to a Massachusetts correction officer who met up with a group of fighters that included Tsarnaev and Mess at a June 2011 Mixed Martial Arts event run by Burlington Brawl, a Vermont-based fighting outfit. Tsarnaev impressed the group with his golden gloves status, but largely kept to himself during the evening.

The imam of the Cambridge, Massachusetts mosque attended by Boston Marathon bombing suspects Tamerlan and  Dzhokhar Tsarnaev sits on the board...