The Ministry of the Interior will invest an estimated 15 million shekels in protecting mosques and monasteries from vandals, IDF Radio (Galei Tzahal) reports. Currently, there is no plan to provide Jewish holy places with similar protection. 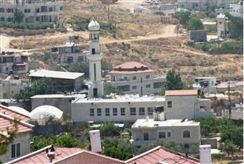 A mosque near Beit El

Minister Gidon Saar has reportedly approved funding for extra security, including security cameras, for dozens of Muslim and Christian places of worship. Among the buildings that will be protected are several that were vandalized in the past along with others that have never been vandalized, but are considered at risk due to their location.

Sagi Keisler of the Binyamin and Samaria (Shomron) Residents’ Councils asked Tuesday if Saar has any plan to provide similar protection to Jewish places of worship. He noted the recent vandalism in Mitzpeh Yericho, which included the desecration of a Torah scroll, as proof that Jewish sites have been targeted as well.

In recent years synagogues have been targeted in arson attacks in Jerusalem, Ramle and elsewhere as well.

Keisler also suggested putting up security cameras at junctions to prevent rock attacks on motorists, and on farms to help fight the phenomenon of thefts and vandalism targeting Jewish farmers.

“If the Minister of the Interior managed to get a sum of 15 million shekels of taxpayer money from residents of Israel, and Jewish residents of Judea and Samaria, in order to care for Arab property, do we not deserve a similar investment in the protection of our bodies and property?” he asked.

Graham: ‘It’s People Like This That You Don’t Want to Let Out of Your Sight’