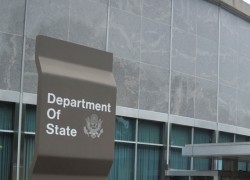 Mr. Kerry said he understood the anger and frustration of those Turks who lost friends and family in the raid. Mr. Kerry, a former Massachusetts senator, said last week’s Boston Marathon bombings made him acutely aware of the emotions involved.

“We have just been through the week of Boston, and I have deep feelings for what happens when you have violence, when something that happens when you lose people that are near and dear to you,” he said. “It affects the community; it affects the country. But going forward, you know, we have to find the best way to bring people together and undo these tensions and undo these stereotypes and try to make peace.”

Likening families of flotilla casualties to those affected by marathon bombing ‘confuses terrorists with their victims,’ says Danny Danon.

Deputy Defense Minister Danny Danon (Likud) on Monday berated John Kerry for comments in which the US secretary of state likened the families of the Mavi Marmara flotilla casualties to those affected by the Boston Marathon bombings last week.

“It is never helpful when a moral equivalency is made confusing terrorists with their victims,” Danon told The Times of Israel. ”As our American friends were made all too aware once again last week, the only way to deal with the evils of terrorism it to wage an unrelenting war against its perpetrators wherever they may be,” he said.

Dzhokhar Tsarnaev, 19, the surviving suspect in the bombing of the Boston marathon, has confirmed that his older brother Tamerlan...