Shots were fired near the French embassy in Yemen on Tuesday, the foreign ministry said, after a car bomb attack on France’s embassy in Libya wounded two French guards and caused extensive damage. 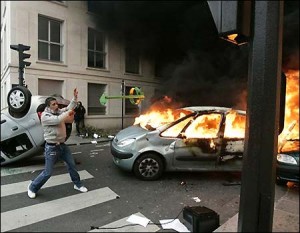 France is watching the situation in the capital Sanaa “carefully”, a ministry spokesman told the AFP news agency.

Paris stepped up security around its diplomatic missions after the bombing in Libya early Tuesday. French Foreign Minister Laurent Fabius warned that the “terrorists” would pay, during a visit to Tripoli.

“This morning a person fired shots into the air near our embassy in Yemen,” said a foreign ministry spokesman in Paris, adding that the Yemeni authorities had been informed of the incident.

“We will monitor security developments on the ground very carefully,” the spokesman said, according to AFP.

Libya is still plagued by insecurity following the 2011 ouster of long-time dictator Moamer Kadhafi. In Mali meanwhile, French forces are locked in a battle against Islamist extremists in the north of the country.

Security chief Mahmud al-Sherif said the blast occurred when a car parked outside the mission’s front door exploded in the early morning.

The blast knocked down the wall surrounding the property and caused extensive damage to the embassy.

Newscom The Highway Trust Fund (HTF), which funds most surface interstate transportation programs, from roads to bridges, faces insolvency in...