An unmanned aerial vehicle (UAV) penetrated Israeli air space from Lebanon Thursday, and was shot down. 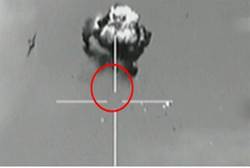 Destruction of the UAV

At around 2:00 p.m. Israel time (11:00 GMT), IAF aircraft belonging to the aerial defense array identified an aircraft making its way from Lebanon into Israeli airspace.

Fighter jets and combat helicopters were scrambled. The UAV was still over the Mediterranean sea when the IAF Commander gave instructions to shoot it down.

An air-to-air missile from an F-16 hit the UAV and demolished it. According to an official statement, it was shot down 5 nautical miles away from Haifa’s coast.

The IAF is now attempting to determine who sent the UAV.

“I view with utmost gravity this attempt to violate our border,” Prime Minister Binyamin Netanyahu said following the incident. “We will continue to do everything necessary to safeguard the security of Israel’s citizens.”

Military censorship allowed publication of the news after a gag order was in place for about two hours.

Hizbullah sent a UAV into Israeli territory in October. The IAF shot it down when it was well within Israeli territory, over Judea. This time, the IAF shot down the UAV before it entered the airspace over Israeli land. The latest UAV was most likely also sent by Hizbullah. The embedded video was released by the IAF after that event.

Senior IAF officers voiced concern after that incident, and said that up to 50 kilograms of explosives could be loaded onto a UAV which would serve as a precise rocket.

In Case You Missed It:  Muslim leaders: 'Many of us pray for Israeli sovereignty'
Posted in Israel, Terrorism and tagged Islam, Israel, Jihad, Lebanon, Predator Drones, Terrorism.

Canada tried to deport one of the two terrorists it caught this week, CBC News confirmed on Thursday. According to...