Speaking in an exclusive interview with Arutz Sheva, former U.S. ambassador to the United Nations, John Bolton, said that the situation with Iran “is very perilous” because the regime “is close to achieving its twenty year long objective of getting nuclear weapons.” 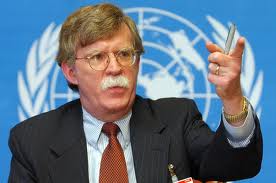 “I don’t think the economic sanctions have slowed the program down at all and I think that unless the United States or Israel takes military action that Iran will get nuclear weapons,” Bolton told Arutz Sheva.

“This is a very undesirable situation to be in and the choices are not good…,” he added.

“We should have acted more forcefully 10 or more years ago,” he asserted, maintaining   that if the US does not take military action, Israel will be forced with the very difficult decision of whether or not to do so.

When asked about the appeal made by Jewish groups, urging President Barack Obama to pardon Jonathan Pollard, who was sentenced to life in prison in 1987 for allegedly supplying Israel with classified information, Bolton said it “is worth considering.”

He added, however, that granting a pardon is “a very hard question”

Prior to Obama’s recent trip to Israel, Jews worldwide were rallying on Pollard’s behalf, urging Obama to grant his release.

“We appeal to you as one who symbolizes the shared values of humanity, compassion and hope for a second chance, that both of our nations embrace,” read an online petition. “We implore you to commute Jonathan Pollard’s sentence to time served without delay and allow him to live out his remaining days as a free man.”

“It is our fervent hope and prayer that your upcoming trip to Israel will bring us the good news we have waited for, for so very long, and that this tragic and painful episode can finally be put to rest once and for all,” it adds.

UAV from Lebanon Shot Down over Israel

An unmanned aerial vehicle (UAV) penetrated Israeli air space from Lebanon Thursday, and was shot down. At around 2:00 p.m....