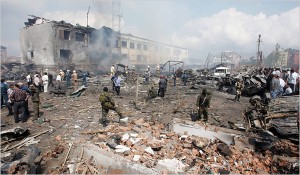 “Why don’t you meet Usama bin Laden, invite him to Brussels or to the White House and engage in talks, ask him what he wants and give it to him so he leaves you in peace? You find it possible to set some limitations in your dealings with these bastards, so why should we talk to people who are child-killers?”

— Russian President Vladimir Putin in 2004 talking to foreign reporters about U.S. calls for a diplomatic solution to the conflict with the breakaway republic of Chechnya after terrorists from the region killed 380 hostages at a school in the town of Beslan in southern Russia.

Perhaps no region in the world can claim a history so tragic and violent as Chechnya and the rest of the northern Caucuses.

The last 20 years has seen nearly constant bloodshed as the mostly Muslim population sought to break away from Soviet and then Russian control. The result has been some of the most brutal attacks on civilians in modern times.

Dozens of bombings and terror raids around Russia have claimed countless lives, but two incidents stand out in the collective memory of Westerners:

— A 2002 raid on a Moscow movie theater, in which Chechen militants took 850 civilians hostage. Some 130 hostages died, mostly as a result of chemicals pumped into the theater by police to subdue the attackers after more than two days. Russian authorities killed all 40 hostage takers.

— A 2004 raid on a school in the rural community of Beslan in southern Russia, capturing and holding hostage more than 1,100. After a three-day standoff, Russian troops stormed the school complex. More than 330 people, mostly children, died at the hands of the terrorists or during the military siege.

The shorthand recent history of the region began as the Soviet Union was breaking apart in 1991. The ethnic Muslims of the region sought the same independence obtained by the Baltic and Eastern European Soviet states.

But owing to the strategic importance of the region for Russia’s oil industry and a long history of conflict between Russians and the Muslim nations on the other side of the Caucasus, the emerging government in Moscow refused to release Chechnya and neighboring Ingushetia.

(During World War II, the local residents had tried to join forces with the Nazis. Josef Stalin delivered vicious reprisals against the civilian population, including terror campaigns, forced relocations and re-education camps. Subsequent Soviet leaders maintained much of this policy.) 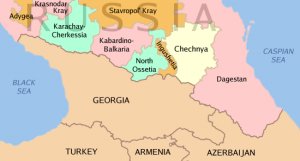 The Chechen separatists declared their independence and using leftover Soviet arms and under the leadership of former Soviet officers, prepared to fight for it. Russian President Boris Yeltsin ordered troops into the rebel province. The resulting conflict lasted two years as rebel guerrillas exacted a heavy toll on demoralized Russian troops and members of the indigenous Russian/Christian population. The Russians ended up retreating in humiliation.

For two years, the region was ruled mostly by warlords, deeply divided by clan rivalries, and increasingly dominated by conflicts between those seeking to establish a secular government and Islamist militants. With the civilian government not only divided, but also hugely corrupt and deeply involved in organized crime, the Islamists found plenty of popular support.

(The local residents converted to Islam in the 16th Century as local tribes allied themselves with the Ottoman Empire to the south against the Russians.)

When Islamists sought in 1999 to expand their efforts to neighboring Dagestan, another Muslim-majority province, the government in Moscow cracked down. Vladimir Putin campaigned on retaking the region and when he took office in 1999, the former KGB agent struck hard.

The brutal Russian campaign swiftly captured the nominal capital of the region, eliminating the government of the breakaway region in a matter of weeks. But Islamist rebels returned to the mountains and kept up the fight. Soon after, perhaps with aid from international Islamist terrorists, they launched their campaign against the Russian civilian population.

The horror at incidents like the theater and school raids mentioned above increased support for Putin’s hard-line stance. Russian raids in the region continued and Putin installed a Russian client regime in the regional government.

Thousands of Chechens have fled the region during the last 20 years, sometimes taking their troubled history with them. European and North American authorities have watched with alarm the rise of brutal tactics of the so-called “Chechen Mafia” in recent years.

A thousand years of history in the region is mostly the story of occupation, retaliation, violence against civilians and conflict between Islam and Christendom – from Genghis Kahn and Tamerlane all the way to today.

Obama Protects Islam At All Costs

All over the world, Christianity is under attack. Muslim countries are murdering, torturing and incarcerating people for one reason, and...