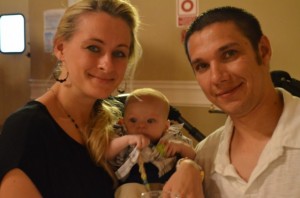 Its official name is Child Protective Services (and most parents recognize its acronym, “CPS”), but too often it seems that a more accurate name would be “Causes Parental Suffering.” CPS employees have no subtlety – they take children away from parents and they make the parents suffer and grovel to get them back. That’s what CPS does. The most recent example occurred in Sacramento, California.

Anna and Alex Nikolayev took five-month-old Sammy to Sutter Memorial Hospital because they were concerned that he was showing flu-like symptoms. Without explanation, the treating doctor began prescribing antibiotics. Because the Nikolayev’s know that viruses do not respond to antibiotics, that overusing antibiotics leads to their becoming ineffectual, and that antibiotics can kill off the “good bacteria” in the intestinal tract, they asked a very good question: Why? A nurse responded that she did not “know” why. The physician refused to respond. Instead, again without explaining anything about to the matter with the Nikolayevs, Sutter admitted Sammy into the ICU and started discussing immediate heart surgery for Sammy’s congenital heart murmur.

Yes, children with heart murmurs are vulnerable to certain types of bacterial infection. But nothing that the Nikolayevs had seen and nothing that the doctors had told them (because the doctors told them nothing) indicated that Sammy needed such extreme treatment at that moment. The Nikolayev’s therefore walked out of the hospital with Sammy in their arms and took him to Kaiser Sacramento for a second opinion.

Although they didn’t bother go through the formal check out process, it’s important to remember that they were leaving a hospital, not a prison. It’s still a free society, after all. The formal check-out process is intended to give patients last minute instructions for their benefit, and it’s intended to insulate the hospital against lawsuits alleging defects in the timing and method of discharging patients.

Once out of Sutter, the Nikolayevs did not take Sammy home and ignore his illness – they took him to Kaiser Sacramento, a highly reputable medical center, for a second opinion. Sutter Memorial, however, was offended that the Nikolayevs bypassed hospital procedures and reported the Nikolayevs to authorities, alleging child endangerment. This led to a polite visit from the police, who concluded that little Sammy was safe.

This should have been the end. There was no reason for Child Protective Services to get involved: the police had concluded that Sammy was safe at home and they knew that Sammy was being seen at Kaiser. Child Protective Services charged in anyway and did what it always does: it went to the Nikolayevs’ house and seized their child. This was no polite bureaucratic intervention. It was a raid. Alex Nikolayev described a frightening government assault:

I was pushed against the building, smacked down. I said, ‘am I being placed under arrest?’ He smacked me down onto the ground, yelled out, ‘I think I got the keys to the house… It seems like parents have no right whatsoever.

As of this writing, CPS is still keeping vulnerable little Sammy away from his loving, concerned parents. His parents have been allowed only two one-hour visits to their son. Citing official policy, CPS is refusing to comment on the case.

Notwithstanding CPS’ silence, we know a few things:

All of these things militate in favor of giving little Sammy back to the Nikolayevs and giving CPS a well-deserved rebuke for causing such parental suffering. That’s not likely to happen any time soon, though, because we know one other thing: In order to continuing fulfilling its bureaucratic mandate, CPS must show that it’s “doing something.”

Too often, CPS ignores children in scary, crime-ridden neighborhoods. They’re the ones we hear about after the child has been starved or tortured to death, with the media reporting that CPS ignored all the signs of terrible child abuse. The easy way for CPS to fulfill its “protect the children” mandate is to bully middle class parents who live in safe neighborhoods. These are the people who will do anything to keep their children and who will grovel before smug CPS agents in order to get their children back.

CPS is a great idea: there are bad people out there and children are easy victims. Unfortunately, CPS too often justifies its existence by going after soft targets, rather than protecting those children facing genuine risks.

(Read about the New Jersey parent who almost lost his son to protective services because of a picture on his Facebook page.)

Scott J. Ferrell/Congressional Quarterly/Newscom As we work to rein in wasteful spending and improve retirement security, our nation cannot afford...