“No one would believe a big strong man was hit by his little wife,” stated Professor Sarah Ben David. However her research shows it happens more often then one might think. 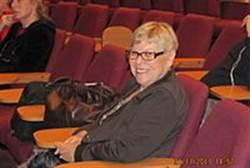 A conference in Israel is focusing on battered men and Prof. Ben David is one of the speakers at the two-day event which is entitled “Violence, Conflicts and Unity in Family Context: A Reappraisal of Therapeutic and Judicial Doctrines.” The conference is being sponsored by the Department of Criminology at Ariel University on Monday and Tuesday April 29th – 30th.

Prof. Ben-David, a Tel Aviv native, serves at head of the department. In her over 30 years of experience in the field, she founded and headed three organizations that deal with domestic violence victims. These are Sha’al, a victims’ assistance service founded in 1979, the El’am Sex Crime Prevention Association, and Keleth – Criminologists for Correctional Services.

Prof. Ben-David spoke to Arutz Sheva about the upcoming conference and explained that she feels men are overlooked. “We do not talk about the victimization of men in the family,” she stated. “I know of no shelters for men in Israel.” Ben-David said that her research has shown that “we know now there is violence against children, the elderly, male, and female. Anyone can be the victim and anyone can be the perpetrator.”

Statistics regarding battered men are hard to come by, she said, because men are far less likely to report such incidents or even think of themselves as victims, Prof. Ben-David opined. She explained that a woman filing a police report of domestic violence is met with sympathy while in contrast a man would be met with ridicule or disbelief.

In the United States, a 2010 national survey by the Centers for Disease Control and U.S. Department of Justice published a National Intimate Partner and Sexual Violence Survey report. It found that approximately 40% of those who reported physical violence were men. Similar statistics were reported in the United Kingdom, according to sources quoting the British Crime Survey.

Prof. Ben-David also dispeled the notion that battered men are typically smaller and weaker. “Even if it were the case that a strong, heavy female hits a small husband, it is unlikely that she will face repercussions for her actions,” she stated. By contrast, if a female were to file a complaint against a male, he is usually detained by law enforcement officials, irrespective of extenuating circumstances.

The police report issue is to be addressed at a session entitled “The Phenomenon of False Complaints.” The guest speaker at the lecture will be a colleague of Prof. Ben-David, retired police inspector Dr. Pinhas Yehezkeli.

“It’s common knowledge where there is a case of divorce the lawyers advise the women to file a domestic violence complaint to the police,” Prof. Ben-David stated. She added that in Israel, there is currently no legal repercussion for filing a false complaint of this nature.

One of the varied sessions at the conference will be a discussion entitled “The Cyclical Effect in Partner Violence: a Model for Interactive Spiral Escalation in Aggressor-Victim Relations.”

Prof. Ben-David is interested in this aspect as well and advocates a different kind of treatment center that will advocate the reconciliation of the family in all instances of abuse. “You need two to tango and you need two for violence. Why are we only treating one person? The perpetrator is sent to anger management and then the children grow without a father or are sent to a boarding school. But I don’t see that a solution. There used to be love in that family. They got married for a reason,” she said.

“One of our missions is to raise awareness so that people will acknowledge there is a phenomenon,” she commented.

Sessions at the conference will deal with child abuse, the media, divorce custody laws, and more. Experts scheduled to speak are from Hebrew University, Bar Ilan University, Ono College, Yezreel Valley College, the Magistrates’ Court, the police department and other institutions. Several speakers are arriving from abroad.

Participation is free and open to the public. For more information email [email protected] or call the Ariel University Department of Criminology at 972-3-9765744.

In Case You Missed It:  SPECIAL PRIVILEGES: NBA basketball stars won't be required to take covid vaccines, just like members of Congress and their staffers
Posted in Freedoms, Israel and tagged Crime, Freedom, Israel.

Newscom After dreadfully low growth in the last quarter of 2012—just 0.4 percent—gross domestic product (GDP) returned to a healthier...