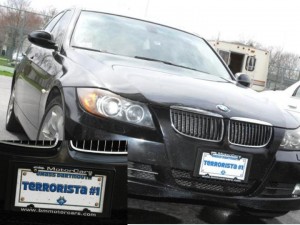 Azamat Tazhayakov and Dias Kadyrbayev were reportedly arrested, along with one other person, for allegedly making false statements and conspiring to obstruct justice during the federal investigation into Boston Marathon bombing suspects Tamerlan and Dzhokhar Tsarnaev, officials said Wednesday.

Tazhayakov and Kadrbayev, who are reportedly in FBI custody, drove around in a black BMW with “Terrorista #1? license plates and were also photographed with Dzhokhar Tsarnaev in Times Square.

Tazhayakov and Kadyrbayev were Kazakh students in Massachusetts. They were taken into custody April 19, then released and arrested April 20 for immigration violations. An attorney for Kadyrbayev said that the students were being held for violating their student visas by not attending classes. (RELATED: Boston police: 3 more suspects in custody)

Tazhayakov and Kadyrbayev were reportedly charged with allegedly making false statements to federal authorities about knowing the Tsarnaev brothers or their whereabouts, and also for conspiracy to obstruct justice for allegedly disposing of items from the University of Massachusetts at Dartmouth dorm room they shared with Dzhokhar Tsarnaev.

Talk about another epic fail after Benghazi. The Obama administration has its hands all over this fiasco atrocity. So the...