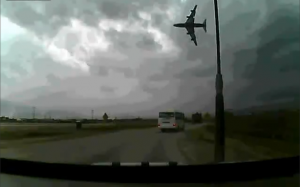 At Monday at approximately 7 a.m. EST, National Flight NCR102 from Bagram, Afganistan to Dubai, UAE with seven crewmembers on board crashed on takeoff at Bagram Airfield in Afghanistan, dashboard camera footage surfaced Tuesday morning on the website LiveLeak — and it provides more answers than you may even feel comfortable watching.

Warning: You’ve probably seen something like this in The Dark Knight Rises or Flight, but this is a real and very scary plane crash — it’s not exactly the stuff of meteors recorded from passing vehicles. The Boeing 747-400 Jumbo Jet ascends before veering off course. Eventually the fuselage becomes nearly perpendicular to the ground and quickly plummets into the airfield.

The Associated Press reports on the seven Americans who died in the crash, including 51-year-old Gary Stockdale and six others:

Speculation is that the cargo wasn’t properly secured and it shifted to the rear upon takeoff, causing the vertical stall. The pilot announced a cargo shift problem over the tower frequency as it was happening. The cargo a large military vehicle moved so far aft that neither pilot nor computer could compensate, the aircraft was carrying 5 military vehicles weighing about 25,000 pounds each.

In Case You Missed It:  Connecticut form requires health care professionals to sign away their lives saying "I voluntarily assume full responsibility for any reactions" caused by covid vaccines
Posted in Freedoms and tagged Afghanistan, United Socialist States of America.

Boston police have three additional suspects in custody in connection to the Islamic Terror Boston Marathon bombings, the department confirmed...