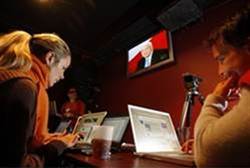 The highest-ranking American military officer, Chairman of the Joint Chiefs General Martin Dempsey, continued this Administration’s naïve attempts to cooperate with China when it comes to cybersecurity during a visit there last week.

China is arguably the worst offender among nations in terms of cyber attacks and cyber theft. The U.S. should stop trying to play nice with the Chinese and stand up to their blatant attacks on U.S. computer systems.

General Dempsey told reporters that he emphasized the need “to seek a level of collaboration and transparency” on the issue and that “cyber threatens our economy and [the Chinese] economy.” He called a China–U.S. working group to combat hacking “timely and appropriate.” These statements, along with then-Secretary of State Hillary Clinton’s remarks last September that the U.S. and China were both “victims of cyber attacks,” have conceded America’s moral high ground on cybersecurity. As Heritage’s Steve Bucci and Paul Rosenzweig put it:

Suggesting moral equivalence between America and China in the cyber realm is as preposterous as Elliot Ness asking Al Capone if they can work together to fight crime in Prohibition-era Chicago.

By turning a blind eye to China’s obvious bad cyber behavior, Dempsey and others are encouraging China to keep hacking, since there will obviously be no consequences from Washington. Even worse, by recommending more cooperation with China on this issue, the Obama Administration is actually rewarding the Chinese for their hacking by allowing them to become more familiar with our cyber systems and cybersecurity responses—and thus better prepared to spy on or disrupt them.

It is especially concerning to see Dempsey make these remarks, since he is certainly well aware of the serious threats that cyber poses to our military as well as our economy. If the White House, the Department of State, and now even the Department of Defense won’t stand up to China, who will?

The U.S. should change its approach to China on cybersecurity. China is not a victim on this issue; it is the perpetrator, and the U.S. should take actions that make its hacking more costly and painful—for instance, by calling out Beijing for its bad actions and ceasing to cooperate. The U.S. should also pursue legal and economic actions against Chinese companies that trade in stolen U.S. intellectual property. On top of that, the U.S. should break down Chinese censorship of the Internet and support the free flow of information within China.

Failing to change the U.S. policy toward China’s cyber crimes will only encourage more crime and attacks. It’s time to stand up to China and defend American interests.

By Trevor Thomas Finally, Bill Maher got something right.  Following the Boston bombings, Maher responded to Brian Levy, the director of...