You the patient, at first, won’t know that you “belong” to the ACO. But the government has assigned you, if you are a Medicare recipient, to a specific ACO. The ACOs will then be held responsible for quality – as defined by government – and for cost containment. 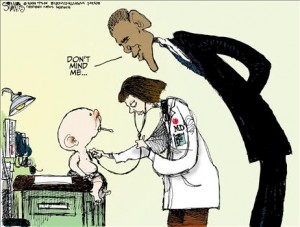 Here is how it will work.

Step one: America will be sliced up geographically into ACOs, which will gather all sorts of patient-care data for the feds and will be paid a fee for service at Medicare rates. The ACOs will be lauded as the saviors of medicine and given bonuses for quality and cost containment. Currently, they are being offered a 50-percent cash rebate for any savings they bring about. Patients can choose to go anywhere for care, in or out of the ACO. Private practitioners outside the system will be “allowed” to keep practicing, they will not be forced to join the ACOs – that would be un-American – but these small practices will be unable to survive the regulatory burden of Obamacare. So, these doctors will retire early, or close up shop or simply go to work for the ACOs, where they will do better financially.

Step two: Once private practitioners are squeezed out of existence, there will be no competition. The ACOs will be the only show in town and totally under the thumb of the federal government. At this point, the bonus money will go away, and the feds will squeeze down payment to doctors and hospitals. (The CFO who spoke at our meeting may think the federal government is willing to leave free money on the table for him to pick up, but that only is doled out to favored political donors, not to producers. The bonus is simply another bribe historically given to businesses by government in order to make them vassals of the state … and businesses never seem to learn.) Small hospitals will have to consolidate under big ones or go out of business. At this point, to prepare for the final step, rumblings of problems in the ACOs will start.

Step three: As government reimbursements diminish and there is no private option, the system will fail to deliver adequate care. Patients won’t be able to get appointments or timely surgery, doctors will complain, hospital staffs will strike and in general the system will implode. Government, always ready to leap into the breach (and reminiscent of the precedent of the Reichstag fire), will declare a national crisis and push through emergency legislation – that is already in the system – to nationalize health care. Hospitals will be taken over by the feds, doctors and nurses and all necessary personnel will have no choice but to be government employees, and at this point patients will be assigned to the ACOs without any choice in the matter. At the stroke of a pen health insurance will cease to exist, and perhaps the companies who sold insurance will be placed in charge of administrating these ACOs. (This road is already being paved as big companies like Blue Cross are given government contracts to administer Medicare.) 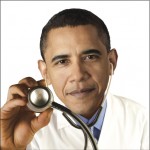 Think this can’t happen? Even some of the ACO administrators admit they are being set up to fail. But fail to what end? To the goal which has been the goal all along: establish a national health service ala Canada or England or Sweden. This is not a medical or societal evolution; this is programmed incremental revolution, and we – like the Russians and French and Cubans – will pay the price, because when free market medicine goes, so goes freedom. The power that brings about this government takeover will not limit itself to medicine. It will consume every facet of the social and economic life of America.
In Case You Missed It:  GEICO Closes All of its 38 California Insurance Offices, Putting Hundreds of People Out of Work: Report
Posted in Financial, Freedoms, Tyranny and tagged Financial, Freedom, Health Care Reform, Health Insurance, Healthcare, Obama, Obamacare, Socialism.

Jews Happy to be Living in Jerusalem, Muslims Not So Much

Jerusalem is Israel's biggest city, the Central Bureau of Statistics announced Monday. In a slew of Jerusalem-related statistics, released in...