As the truth trickles out about what REALLY happened at Benghazi, look what the U.S. State Department may have scrubbed the night of Sept. 11, 2012. 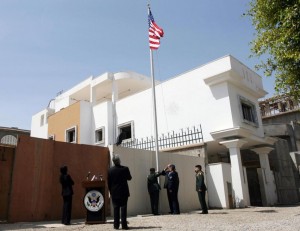 Did the State Department scrub information about a dramatic incident the night of the Sept. 11, 2012, Benghazi attack in which U.S. Embassy staff 400 miles away in Tripoli evacuated their residential compound under possible terror threat?

The threat was taken so seriously that, according to a key embassy staffer, communications equipment was dismantled and hard drives were smashed with an ax.

The scene was first brought to light in congressional testimony last week by Gregory Hicks, the former U.S. deputy chief of mission in Libya, but it remains largely unreported by news media.

The incident also was not mentioned in the State Department probe nor was it previously reported in news accounts of the attack, which the Obama administration first claimed was a result of popular protests about an anti-Muhammad video.

In his testimony, Hicks said that about three hours after the attack began on the U.S. facility in Benghazi, the embassy staff in Tripoli noticed Twitter feeds asserting that the terror group Ansar al-Sharia was responsible. Hicks said there was also a call on the social media platform for an attack on the embassy in Tripoli.

“We had always thought that we were … under threat, that we now have to take care of ourselves, and we began planning to evacuate our facility,” he said.

“When I say our facility, I mean the State Department residential compound in Tripoli, and to consolidate all of our personnel … at the annex in Tripoli.”

Hicks said that he “immediately telephoned Washington that news afterwards and began accelerating our effort to withdraw from the Villas compound and move to the annex.”

He recalled how his team “responded with amazing discipline and courage in Tripoli in organizing withdrawal.”

“Our office manager, Amber Pickens, was everywhere that night just throwing herself into some task that had to be done. First she was taking a log of what we were doing,” he said.

“Then she was loading magazines, carrying ammunition to the – carrying our ammunition supply to … our vehicles, and then she was smashing hard drives with an ax.”

The vivid, nearly unprecedented scene, however, was not reported in the State Department’s description of the Tripoli embassy’s response the night of the Benghazi attack.

The section of the State Department probe titled “Embassy Tripoli Response” simply says that upon notification of the attack in Benghazi, the U.S. Embassy set up a command center and notified Washington.

A later section in the State Department probe describes how a seven-person response team from Tripoli arrived in Benghazi to lend support but could not get to the Benghazi facility due to a lack of transportation.

The section also says the Tripoli embassy worked with the Libyan government to have a Libyan Air Force C-130 take the remaining U.S. government personnel from Benghazi to Tripoli.

Obama Administration Under Siege From 3 Huge Scandals: Here’s Why It Could All Come Crashing Down

In just one week, President Barack Obama's political machine has switched from endless campaign to survival mode. And for the first...