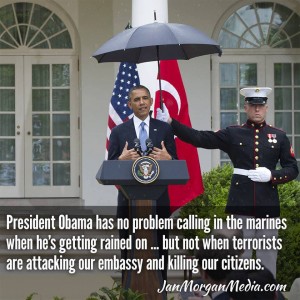 Even though he is the commander in chief, there are some orders that even President Obama cannot give – as he found out today, much to the chagrin of a put-upon U.S. Marine.

Hosting Turkish Prime Minister Recep Tayyip Erdogan in the Rose Garden, the president requested a standing Marine to open an umbrella and protect his head from the light rain that was falling.

However, according to Marine Corps regulations, not even the President of the United States can request a Marine to carry an umbrella without the express permission of the Commandant of the Marine Corps.

The Marine Corp Manual, which is the bible for all soldiers serving, specifically states that a soldier’s uniform dress code does not allow the carrying of an umbrella and ‘no officer or official shall issue instructions which conflict with, alter, or amend any provision without the approval of the Commandant of the Marine Corps.’

Indeed, male Marines are informed never to carry an umbrella from the earliest phases of training.

Regulation MCO P1020.34F of the Marine Corps Uniform Regulations chapter 3, rules out any use or carrying of an umbrella while a Marine is in uniform.

However, female Marines ‘may carry an all-black, plain standard or collapsible umbrella at their option during inclement weather with the service and dress uniforms. It will be carried in the left hand so that the hand salute can be properly rendered.’

Chapter 3 of the MCO P1020.34F of the Marine Corps Uniform Regulations, which states:

Female Marines may carry an all-black, plain standard or collapsible umbrella at their option during inclement weather with the service and dress uniforms. It will be carried in the left hand so that the hand salute can be properly rendered. Umbrellas may not be used/carried in formation nor will they be carried with the utility uniform.

As can be noted here, female Marines are permitted to carry umbrellas while in service or dress uniforms. The Marines pictured holding umbrellas are in dress uniforms, but they are males and the Marine holding one above Obama is using his right hand.

During the press conference, President Barack Obama dodged questions about the IRS’s targeting of conservative groups, shifted responsibility for the Benghazi attack to Congress, and said ‘I offer no apologies’ for the Department of Justice’s secret seizure of reporter’s phone records in search of a classified intelligence leak.

In a rain-soaked Rose Garden press conference originally intended to be a victory lap for the United States’ relationship with Turkey, Obama stood alongside Turkish Prime Minister Recep Erdogan and fielded questions which quickly shifted to the trio of scandals that are engulfing his administration.

Beginning in 2010, Obama’s IRS targeted a list of approximately 300 tea party-related and other conservative groups for aggressive scrutiny following their applications for tax-exempt status.

His Department of Justice secretly spied on the Associated Press’s phone records in an attempt to trace a national security leak.

And his State Department political appointees intervened in the aftermath of the 2012 terror attack on an American diplomatic outpost in Libya, in a process that resulted in a misleading set of talking points which ignored terrorism in favor of a more muted explanation, in the midst of a re-election campaign.

On the IRS scandal, Obama wouldn’t commit to saying no one at the White House knew about the targeting of conservative groups before the White House Counsel was informed just days ago.

‘I certainly did not know anything about the IG report before the IG report was leaked to the press,’ he said, without addressing the question of whether any of his political appointees in the West Wing of the White House were aware that the IRS was playing political favorites.

He also did not address information outside what the IRS Inspector General reported.

In Case You Missed It:  Woke Pro-Vaccine Army Sergeant Wants You to Know She’s Ready and Willing to Shoot You When Martial Law Is Declared
Posted in Tyranny and tagged Military, Obama, Turkey, White House.

Newscom This week, the House Republican conference met to discuss what their priority will be in connection with any vote...