The Petach Tikva Magistrates’ Court issued an order Sunday distancing two residents of Yitzhar, in Samaria, from their community, for 60 days. 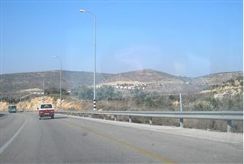 According to Honenu, an NGO that assists Jews who are prosecuted for nationalism-related offenses, the two were involved in a verbal altercation between Border Police and youths who reside at the Hasruga outpost near Yitzhar.

Last Friday, following confrontations between residents of the Arab village of Urif and Border Police, two Jewish youths began arguing with some of the policemen.

According to the police, the youths singled out a non-Jewish policeman who was in the force and accused him of serving the interests of the Arabs. The police arrested one of the youths, and then arrested another youth when he tried to hinder the arrest of his friend.

Yitzhar residents then blocked the Border Police force from leaving their community with the arrested youths. In the end, as the Sabbath approached, the police left the scene through the Arab village. The youths were taken to the Ariel police station and on Saturday evening were brought before the Magistrates’ Court at Rishon Letzion, which extended their remand.

On Sunday, the police requested that they be distanced from Yitzhar for three months. The court agreed to distance the youths, but only for two months. They were also ordered to deposit a sum of money as security.

Honenu said that “The determination of the security forces vis-à-vis teenage youths who harmed no one is commensurate with their inefficacy vis-à-vis the Arab marauders.”

“There is a clear policy in Judea and Samaria that is based upon the teachings of Peace Now, B’tselem, Machsom Watch and Nitzan Alon, and it is implemented thoroughly,” the NGO said.

In Case You Missed It:  9-11-2001 NEVER FORGET
Posted in Israel and tagged Islam, Israel, Jihad, Judea and Samaria, Palestinians, Terrorism.

The Syrian army has begun deploying advanced surface-to-surface missiles and has aimed them at Tel Aviv, the British Sunday Times...