The Internal Revenue Service has been caught harassing groups that seemed “conservative” or “right-wing.” Yet the fact that the IRS did not give the same unjust treatment to all right-wing advocacy groups is being treated  by CBS as a kind of negligence. 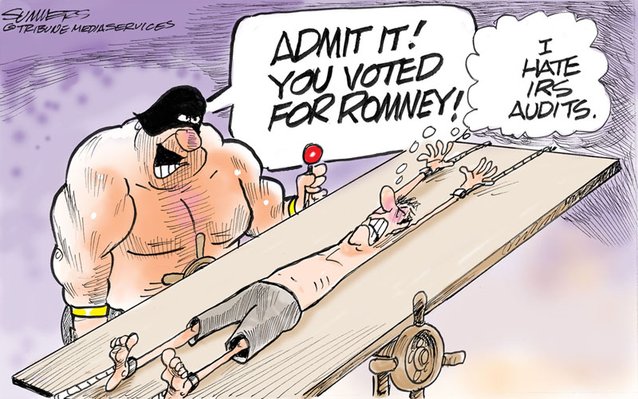 “Karl Rove’s Crossroads GPS and the Koch brothers’ Americans for Prosperity were among those that spent tens of millions of dollars on TV ads and get-out-the-vote efforts to help Republicans. Democrats were aided in similar fashion by Priorities USA, made up of former Barack Obama campaign aides, and American Bridge 21st Century Foundation, an opposition research group led by a former adviser to Senate Majority Leader Harry Reid. And yet those groups so far have escaped investigations into whether they have crossed the blurry line under the law between what constitutes a tax-exempt “social welfare” organization that is free from donor reporting requirements and a political committee subject to taxes and disclosures.”

First of all, the way this story if framed makes light of the real offense. A failure to harass an organization is not to “overlook” it. Rather, that is exactly what should happen in a free society. Organizations should have the right to not be harassed. The sin here is that the IRS didn’t overlook everyone.

Secondly, this is simply what always happens with government regulators. We saw it with the SEC when they made a showcase of jailing Martha Stewart while leaving Bernie Madoff alone. Big organizations have big law firms. Functionaries in the IRS may have nightmare powers over small groups in Iowa, but they know better than to start quizzing Karl Rove’s people on the content of their members’ prayers.

This is something the media never admits. They always act as if the system is reformable and they quote some advocate who has some law on hand that will fix everything. But the same people who work for Presidential administrations rotate into lobbying and law firms. People with connections to classmates in Yale and sitting judges are never going to be vulnerable to the same shakedowns that are inflicted on the little people.

CBS quotes Sheldon Whitehouse, a Democratic Senator, saying that, “Picking on the little guy is a pretty lousy thing to do.” The Democrat Senator from Rhode Island is “among a small Senate group pushing campaign finance reform measures that would force these big outside groups to disclose their donors.” But what exactly would that accomplish? Think of all the little guys who send money to the big organizations.  They would just be vulnerable to more harassment. By appealing to our sense of fairness, we are being misdirected from the most appropriate solution: don’t pick on anyone, big or little.

The only answer is to recover a society where how you spend your money is your own business, not one with even more prying into financial decisions. To get rid of the problem of corruption, the best solution is to reduce the scope of government so that it is no longer attractive to try to buy political favors.

The problem is big government, not a lack of spying on spending.

"Obama and his co-conspirators aren't liberals; they're Maoist-Leninists. Comprehending what that means will be the difference between life and death."...